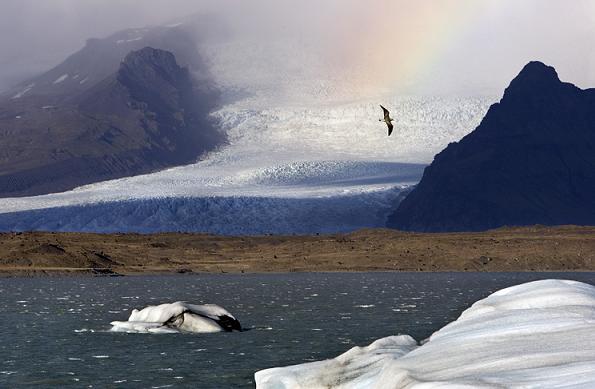 Iceland sits right on the divide between the North American and Eurasian continental plates. A little hotspot of volcanic activity in the North Atlantic, it has tried to rediscover its geopolitical identity several times over the past century.

I recently read Klaus Dodds and Valur Ingimundarson’s article in the Polar Journal, “Territorial nationalism and Arctic geopolitics: Iceland as an Arctic coastal state.” Essentially, what the authors posit is that Iceland has most recently been trying to position itself as an Arctic coastal state. During the Cold War, Iceland enjoyed a strategic position between North America and the USSR.

When the U.S. departed Naval Air Force Station Keflavik in 2006, Iceland was finally forced to accept that Washington, D.C. no longer saw it as having such a strategic location. Six years later, however, the country’s strategic profile has risen again, though this time in more of an economic sense than a political one. Companies and investors are interested in possibly turning Iceland into a major transshipment port for Arctic shipping and in developing potential oil and gas resources offshore.

Moving beyond the financial crisis

Yet before Iceland can really make progress with major new projects, it still has to escape the fallout of the 2008 financial crisis. This came as a shock to the country, as having to accept loans from the International Monetary Foundation essentially made Iceland feel lumped in with third-world countries.

With the collapse of the financial sector, the government realized that the national currency, the krona, was too vulnerable to shocks and external factors. Thus, the Social Democratic Alliance, which currently holds the most seats in the Icelandic parliament, has been pursuing membership with the European Union and adoption of the euro.

This does not sit well with many Icelanders, though. Many hold quite strong views of their country as a staunchly independent nation, especially when it comes to issues like fishing – the renewed lifeblood of their economy. EU membership could take away some of their autonomy in that regard.

Moreover, even if Iceland does have to ally itself more closely with another entity, it is not a guarantee that that entity will be the EU. Not too long ago, some Icelandic politicians floated the idea of adopting the Canadian dollar as their national currency. Heidar Gudjonsson, an Icelandic economist, said in an interview with Business Insider, “There are several reasons why Iceland will take the Canadian dollar rather than the U.S. dollar. The first reason is cultural. Around 200,000 Icelanders live in Canada. And life in the Arctic and life in the north is different from life in the south.

This discourse reflects a certain vision that Iceland is a northern/Arctic country rather than a European one. Gudjonsson sees Canada as more legitimately “northern,” even though the EU counts Denmark, Sweden, and Finland among its members. His statement shows that the EU is viewed as being in the south, a vision that might be shared by other Arctic states which bristle at the notion of things like an EU Arctic policy.

Thus, we see that Iceland is still trying to find its place between North America and Europe. Yet we can add a third region to this struggle: the Arctic. As Dodds and Ingimundarson note, Iceland has been trying to reimagine itself as a country that is not only Arctic, but also an Arctic coastal state. Were other countries to accept this geopolitical positioning, Iceland would be invited to meetings of the exclusive (though informal) Arctic Five club, which consists of the five countries with coastlines on the Arctic Ocean: the U.S., Canada, Denmark/Greenland, Norway, and Russia.

Iceland is trying to expand the conception of the Arctic as a region that stretches down into the North Atlantic rather than being contained strictly to the Arctic Ocean. Additionally, whereas there is a lot of controversy within parliament over EU membership, there is “cross-political consensus…on prioritizing the Arctic in Icelandic foreign policy.” Yet though politicians feel strongly about emphasizing Iceland’s role in the circumpolar north, Dodds and Ingimundarson concede that the Arctic has “never had an exalted place in Iceland’s political and cultural imagination.”

National circumpolar identities vary quite dramatically from country to country. For instance, while Canada and Iceland do have several things in common, as Gudjonsson noted, they diverge in their national ties to the Arctic. Canadians feel attached to the “True North strong and free,” while that type of rhetoric is lacking in Iceland. The island’s geopolitical identity is in flux, being pulled three ways between North America, the European Union, and the Arctic.

Iceland will hold national elections in May 2013, and it may hold a referendum on EU membership next fall. The new finance minister, Katrin Juliusdottir, said in an interview with Bloomberg Businessweek in September, “For a country that wants to have strong commercial links to the international community, it’s hard to utilize the krona as the country’s currency…That’s a fact. Our currency is extremely volatile and sensitive toward external factors.” Of course, all members of the Arctic five currently have their own currencies. Iceland’s economy is much smaller and heavily relies on commodities, though, so if it wants to turn into a real center for industry and business in the Arctic, using one of the world’s top currencies might be a better option.

If Iceland were to join the EU, that would add another dimension to its geopolitical positioning. Iceland would be intrinsically linked to what Gudjonsson calls the “south.” Its pursuit of a higher profile in the Arctic could be diluted, as its attention might turn more towards the European continent. At the same time, the EU would gain an additional foothold in the Arctic, which could bolster its quest for permanent observer status in the Arctic Council. Iceland might be able to balance multiple geopolitical identities, but the more it has, the less involvement it will have in any one area.