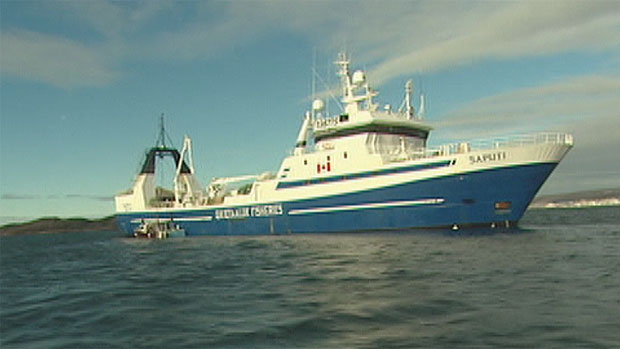 A recent makeover to an Inuit-owned fishing vessel in Canada’s eastern Arctic territory of Nunavut, means more opportunities to capitalize on a growing fishing industry in the Arctic.

The 25-year-old ship ‘Saputi’ got a retrofit from its majority owner, Qikiqtaaluk Fisheries Corporation. It now has more storage space and can make longer trips.

The extension increased the cargo hold which will allow Saputi to carry up to 900 tonnes of turbot or shrimp per trip – up from 650 tonnes.

The main freezing system was also replaced, and a winch was upgraded to allow for mid-water trawling.

“We have five freezers and we can freeze up to 35 tonnes a day or in a 24 hour period,” said First Mate Gordon Frances.

The ship has been stopped in Iqaluit since Friday.

“Everything has come into play. Everything seems to be working well, so it’s a win-win for everybody at this moment,” said Harry Flaherty, the president of Qikiqtaaluk Corporation.

On average, there are 24 crew members who navigate and clean and package the fish.

Poasie Peter, a factory worker, said his job has benefits.

“I first did it out of adventure and it became a habit that I really enjoy doing.”

The crew on the ship say they appreciate the upgrades, but add that it’s always hard to be away from family. “It’s still hard but it makes it better… it’s not for everyone — on average you spend six months out of the year,” said Roderick Wencil, the 2nd Trawl Boss.
In the summer and fall, turbot is caught at sea and taken to Nuuk, Greenland. From there, the fish is sold on the Asian market.

In winter, the crew fish for shrimp.

Last year, the company raked in millions of dollars in profits. It hopes to create more jobs and keep riding the waves of success in the future.

Saputi and her crew will sail off tonight en route to Greenland to drop off the 830 tonnes of turbot and shrimp.