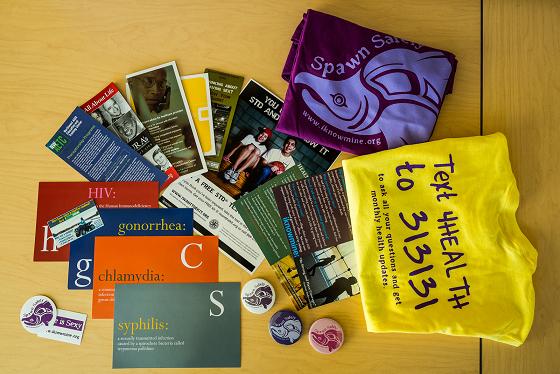 A few Alaska programs are hoping to get young people talking about sex in rural Alaska, where sexually transmitted disease and teen pregnancy rates are shockingly high.

With rates of certain STDs dropping slightly, the programs may be headed in the right direction.

One program, IknowMine.org, focuses on a website that offers health advice — ranging from alcohol and drugs to smoking and sex.

Another — called “PHAT” — uses trained “peer-educators,” teens ages 15 to 21, to have conversations with fellow youths about sex, intimate partner violence and relationships.

Teens in rural Alaska have some of the highest rates of sexually transmitted disease in the country, particularly gonorrhea and chlamydia. Data collected over a 10-year period shows that Northwest Alaska — a collection of rural villages far off the road system — has the highest per-capita rate in the state with 2,277 cases per 100,000 people. Nationally, only 101 cases of gonorrhea per 100,000 people were reported in 2010.

In the Yukon-Kuskokwim river delta the rate is slightly lower — 2,049 cases per 100,000 people, twice the statewide average.

Overall, Alaska ranks third in the gonorrhea rate per-capita, according to the Centers for Disease Control.

But there is some good news: The number of infections are dropping statewide with chlamydia down 5 percent and gonorrhea falling a full 25 percent from 2010 to 2011.

Four years ago, the Alaska Native Tribal Health Consortium (ANTHC) went to villages, hosting meetings with youth, parents and educators in an attempt to learn what sort of sex education rural youth might welcome.

The website’s creation came the heels of an Alaska gonorrhea outbreak according to Connie Jessen, program manager for consortium’s HIV/STD prevention program.

The website is loaded with information on sexually transmitted diseases, sexual health and where to get tested. A link allows users to get free condoms — 20 at a time — sent to their home.

Recently, the website got a face-lift, too. Jessen said it still has information on sexual health, but now includes a broad variety of heath topics, including healthy relationships, drugs and alcohol, nutrition and emotional help.

Jessen said sexual health is often directly tied to other health problems. And she added that women experiencing interpersonal violence are 19 times more likely to be treated for an STD within the year.

“In order to really to get to where we want to be, we have to address all aspects of their wellness,” she said. “(The website) is the first piece toward that.”

Through the website, a free testing kit for gonorrhea and chlamydia can be ordered discretely. Since the program started last August, 574 kits have been sent out, Jessen said.

While the site is geared toward rural Alaskans, anyone in the Alaska can order condoms and testing kits.

Another program dubbed P.H.A.T. (Promoting Health Among Teens — Comprehensive Abstinence and Safer Sex Intervention) takes the information a step further. The program trains peer educators — youth aged 14 to 21 — to share the program with other young people.

PHAT uses a behavior-intervention model, with peer educators using role-playing exercises to teach youth how to react, depending on the situation.

Stephanie Birch, section chief for the state Division of Women’s, Children’s and Family Health, said in an email that the PHAT curriculum was selected because it uses a model in which abstinence education comes first, with comprehensive sex education discussed as an alternative.

In total, the program has 22 peer educators and will reach about 225 youths a year, according to Birch. Participants are drawn from behavioral health residential facilities, alternative high schools, juvenile detention centers, foster care and transitional housing — but not traditional schools.

Eileen Arnold, youth services coordinator for the Tundra Women’s Coalition, said teens — and adults who interact with those teens — have responded well to the program during the PHAT pilot program, which started this year.

“It’s a very comprehensive program,” she said. “It doesn’t assume youth are doing anything.”

Two other Alaska programs are similar in scope. The state’s “Fourth R” program, which adds a fourth R (relationships) to reading, writing and arithmetic. It’s led by teachers in school and targets bullying, dating, peer and group violence and “empowers adolescents to make healthier decisions about relationships, substance use and sexual behavior,” according to the program’s website.

Under Alaska Gov. Sean Parnell’s administration, funding for sex education in the state has been tenuous. In 2011, the state withdrew support of a $600,000 grant set for use by the Department of Health and Human Services over a sex-education program that focused on condoms rather than abstinence-based education.

Instead, the division went with PHAT.

“(PHAT) provided a better abstinence-primary message for teens and was more in line with the goals of the program to promote healthy relationships,” Birch said.

“We always say wait to have sex,” she said. “But if they don’t know what abstinence means, we have to be specific.”