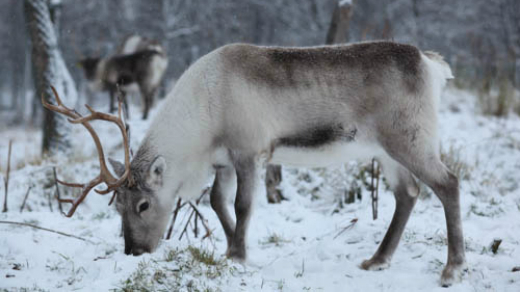 Researchers are taking a closer look at the noses of reindeer with the hopes of inventing energy-efficient technologies.

Animals that live in the Arctic have many unique qualities that help them deal with freezing temperatures. Now researchers think they be able to artificially reproduce the traits to make more green technologies.

“Reindeer have sophisticated warming structures in their nostrils that allow them to maintain their body temperature while they breathe,” says Lars Folkow, a professor at the Institution for Arctic and Marine Biology in Tromsö, Norway, to Swedish Radio.

There are an estimated 300,000 reindeer, known as caribou in North America, in northern Sweden. Reindeer herding and hunting are a key part of the culture and economy of the indigenous Sami population in Sweden’s North.

The normal body temperature of a reindeer is around 38 degrees Celsius. But thanks to their advanced heat exchanging nose systems, where they reuse the air they have just expelled, the air that leaves their nostrils can reach extremely low temperatures, somewhere around 5 to 6 degrees.

But when the reindeer need to run in the deep snow, their breath recycling and the thick fur becomes a problem. So to ensure that the body temperature does not get too high, the heat exchanger switches from maintaining heat to, with the help of the breath, chilling down the blood that is on its way to the working muscles.

And when the animal really works hard, the cold blood is sent to the brain, which is extra sensitive to overheating.

“In that situation, the body gets too warm, but it keeps the head cold,” says Folkow. “So maybe that’s what allows a reindeer that’s being hunted by a wolf to get the jump it needs to survive.”

Now biologists in Tromsö together with engineers from the Norwegian University of Science and Technology will research whether it is possible to artificially replicate the processes in the sophisticated reindeer nostrils. They hope to be able to use any such discovery to build a more energy-effective heat exchanger for use in industry.

Researchers in Norway have also discovered that reindeer have much more blood flow in their noses than humans, meaning Rudolph the Red Nose Reindeer was worthy of his name.