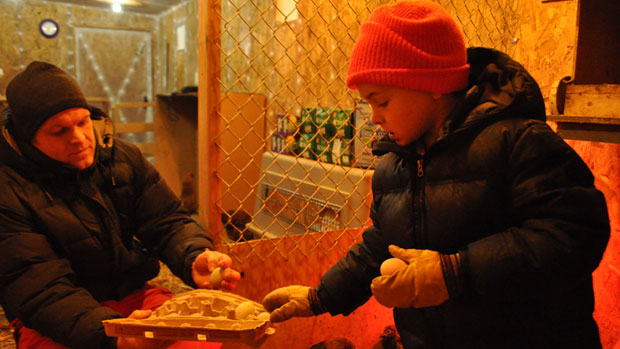 A family, living in the Arctic community of Inuvik in Canada’s Northwest Territories, is learning how to run a farm.

The Halpine family farm is subsidized in part by the territorial government, which is promoting agriculture in the North.

Dave Halpine steps inside his shed to check on his 22 chickens, five rabbits and two goats. He said heat from the animals and one heat lamp is enough to keep the barn warm in freezing temperatures.

“It’s a fun little oasis. The heat from the animals keeps the temp at zero and it’s kind of nice at -30 to come in [and see] the lights, the smells, the hay,” he said.

Halpine’s seven-year-old son, Aaron, sees the perks of farming in the town, which is located north of the Arctic Circle.

“All of the food at the store isn’t really, really fresh because it has to travel in a big transport truck form any place down to Inuvik. It can get soft, mushy and stuff,” said Aaron.

His father said he thinks it’s important for his kids to understand where their food comes from. He also wants them to learn about animals and the health benefits of making organic food.

“Those are the kind of prizes — we get to have this little operation and let the kids participate and work and be a part of it.”

Halpine said what they gain by collecting eggs and eating the animals, they lose in paying higher electricity bills and shipping hay from B.C.

“Hopefully some time soon we can say we’re profiting or breaking even,” he said. “I don’t know if we’ve seen a difference [in bills]… It is enjoyable, feels worth it to have fresh eggs. We saved on turkeys by having chicken at Christmas.”

Halpine, who also works at a school in Inuvik, said people are always surprised to find out he runs a farm in the Arctic.

“Lots of students, at the mention of chicken and goats, they look at me like I have two heads,” he said.

But he said he always has a gaggle of students asking to see the rabbits and chickens.

Halpine hopes to increase production and sell eggs and milk. He is also expanding the farm.

Three of his rabbits are pregnant and both goats will deliver kids this winter.