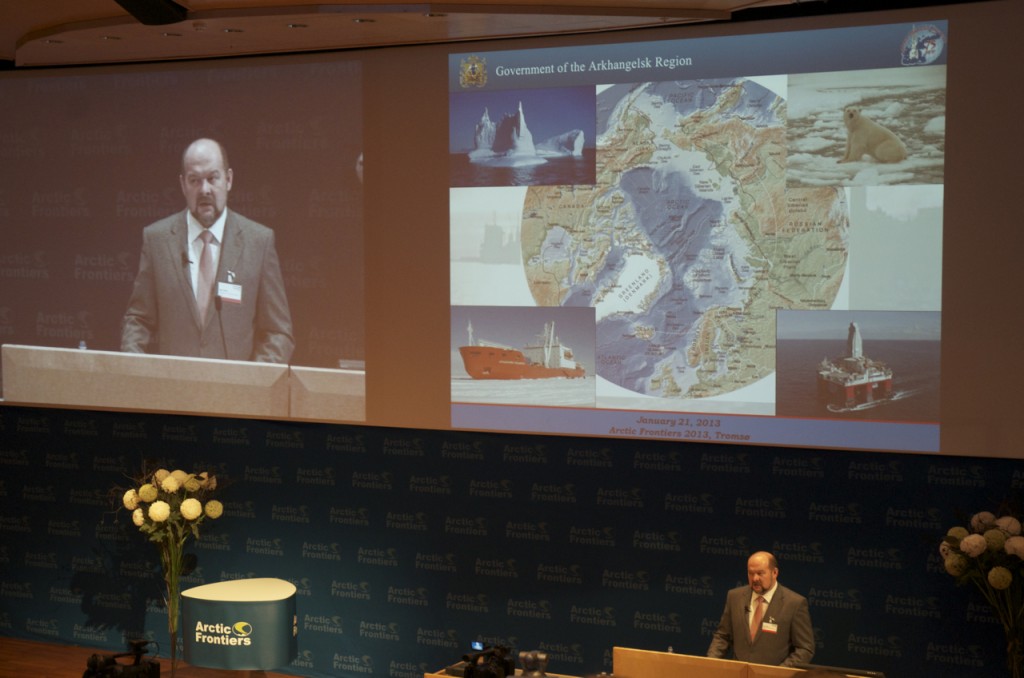 At the Arctic Frontiers conference, attendees had the opportunity to listen to numerous government and NGO representatives from Russia speak in their own language.

If my memory serves me correctly, the Russians were the only ones who spoke in their own language, as the people from the Nordic countries and Asia all spoke in English. This didn’t pose any problem, though, as we were all able to listen to a translation through our headsets.

Rather, the thought struck me that even though some of the Russians who spoke in their mother tongue might have adequate English skills, choosing to speak in Russian at a large conference is a clear, and I think confident, manner of distinguishing the Russian Arctic from the rest of the Arctic.

Certainly, many Russian academics did speak in English when presenting their research. Yet for the several government representatives who gave talks, speaking in Russian sent the message that their language is important and necessary to know if we are to fully understand the Arctic. The Russian Arctic encompasses 44% of the entire circumpolar area, according to the Arctic Council. As Yevgeny Lukyanov, Deputy Secretary of the Russian Security Council, stated during his talk, “Russia has the biggest share of the Arctic, and we’re proud of this.” Lukyanov also proudly described the long history of Russian scientific research in the Arctic, stretching back to the 16th century of the Russian Empire. This might draw a contrast with the more recent interest shown by Asian states, whose very newness might serve to undermine their stature in the region. Russia is both big, and old, when it comes to the Arctic.

Sometimes it seems that there is a large gulf between the Russian and Nordic/North American sectors of the Arctic. I was sitting next to one other attendee who mentioned that even though Russia has brilliant scientists working on topics like climate and oceanography in the Arctic, there still isn’t a huge amount of collaboration with scientists from other countries. I’m not sure how true this is, having no experience in scientific research myself, but even from the way in which conference attendees mixed and mingled, it still does seem as if there is some sort of invisible barrier between the Russian Arctic and the rest. In any case, it was great to be able to hear several Russians speak, and I think particularly helpful that they spoke in their own language.

The importance of the North to Russian identity

Lukyanov was the first Russian to give a talk (video of his speech here). Recalling the importance of the north to the Russian identity, he observed, “The Arctic, and everything that’s related to this concept, is not something abstract for Russia. It’s not a romantic, exotic concept. It’s just the everyday and vital reality.” Lukyanov spoke about some of the main documents behind Russian policy in the Arctic, but he also focused on the development of the Northern Sea Route, not only as a summertime operation, but as a year-round transportation artery.

He stated: “The sooner this route comes into operation, the sooner we’ll get the economic benefits. This concerns not only Russia, but also our foreign partners, which we’d very much like to involve into the development of these vast areas. In any case, Russia will, of course, reserve the right to control the transportation along this route and the compliance with economic and environmental requirements. We must exclude, of course, such negative elements as illegal migration, smuggling, drug trafficking. I don’t think that the Somali pirates will move their operations to the High North, even against the background of global warming. We have to cooperate with other Arctic states in order to resolve these issues.”

Other Russian government leaders spoke, including Igor Anatolievich Orlov, governor of the Arkhangelsk oblast. He had a rather insular view towards rule-making in the region, declaring in what was essentially a restatement of the Ilulissat Declaration, “The rules of the Arctic must be developed by the Arctic states themselves. They, and only they, can make the rules.” During his talk, he also strongly promoted development in Arkhangelsk, which he likened to a “big open-air museum.”

He wants to put the Barents Sea on the “world tourist map” with attractions such as a cruise line between Tromsø and Arkhangelsk. (Perhaps this could be some sort of bilateral project that the famed Norwegian Hurtigruten cruiseline could work on with a Russian partner.) Arkhangelsk is also developing other means of transportation within the oblast, such as the Belkomur, which I mentioned in an earlier post. The planned 1,100 kilometer railroad is supposed to connect with railroads coming from eastern Russia, northeast and Central Asia, and “bring into development hitherto inaccessible natural resources.” The Belkomur should also connect with a deep-draft port planned for Arkhangelsk, which will have direct access to the sea and won’t require icebreakers to access. Yet like many grand plans for infrastructure in Russia – the extension of the Trans-Siberian Railway to the far eastern corners of Siberia comes to mind – there is much debate as to whether it will actually come to fruition.

Perhaps the speech I found most interesting was that of Alex Sergunin, an academic from St. Petersburg State University. He drew a parallel between the US flag on the moon with the Russian flag on the bottom of the seabed underneath the North Pole. This isn’t the first time such a comparison has been made. When the flag was planted on the seabed in 2007, Sergei Balyasnikov, a spokesman for Russia’s Arctic and Antarctic Institute, stated, “This may sound grandiloquent but for me this is like placing a flag on the moon, this is really a massive scientific achievement.” Yet the two geopolitical acts are quite different: the first was by a state, the second by a private expedition. Neil Armstrong uttered the words that would mark the achievement as one for humanity more so than the U.S.: “That’s one small step for man, one giant leap for mankind.” Even though the U.S. triumphed and beat the Soviets to the moon, I would argue that the American astronauts, at the very least, did try to frame the event in a more cosmopolitan light, whereas the Russian act of planting a flag under the North Pole (though privately funded) was tinged with claim-staking and sovereignty. If and when the Chinese go to the moon, it will be interesting to see if they also place a flag on the lunar surface – and if so, how the Americans react.

Sergunin also drew a picture of a “diverse” Russian intellectual landscape with “several approaches to the Arctic.” So-called alarmists only constitute a small portion; the rest of the landscape is essentially divded between a securitized and a de-securitized approach. Ultimately, Sergunin opined, “In the near future, Moscow’s strategy in the Arctic will be predictable and pragmatic rather than aggressive or spontaneous.”

While its foreign policy might be predictable, Moscow’s moves domestically are more erratic, particularly in light of its closure of the country’s only indigenous peoples’ organization, RAIPON. None of the speeches by government leaders referenced indigenous peoples in any way, although it’s to be expected that Russian policymakers and government representatives would toe the Kremlin’s line. More surprising was that even the one indigenous person from Russia who did speak, Galina Platova of the Association of Nenets People, was still markedly restrained in her criticism of the government’s action. In her talk, called “The People in the Twilight Zone,” she even found the time to criticize projects in Canada, such as the oil sands, and suggested that Finland do more to protect reindeer farming.

This criticism is of course important, as Western media often highlight the oppression of indigenous peoples in Russia while overlooking problems in the other half of the Arctic. Still, Platova argued, “Indigenous peoples in the U.S., Canada, and Greenland are in a better position than those in the Nordic countries and Russia, where the legal framework is changing rapidly.” “Changing rapidly” is quite a euphemism when the modification in the legal framework entails the sudden shutdown of RAIPON. Offering no harsh rebukes of the government’s action, Platova instead merely hoped that the organization could still participate in the 2014 Conference of Indigenous Peoples. She also observed that the work of indigenous peoples done in the Arctic Council is extremely important – work RAIPON can no longer do.

Oddly enough, it seems that the party that came out most vocally in support of indigenous rights in the Arctic was China, despite its own record of human rights abuses near the third pole of the world, in Tibet. The Ambassador to Norway, Zhao Jun, likely did so in his speech for a number of reasons. One, China seeks to extract rare earth metals and other minerals, like iron, from Greenland, where the population is 88 percent indigenous. Therefore, Beijing needs to curry favor with groups like the Inuit. Two, if China is to win permanent observer status in the Arctic Council, it will need the support of permanent participants, namely the six indigenous organizations represented. China, then, has more riding on indigenous support than Russia if it wants to succeed in its Arctic ambitions.