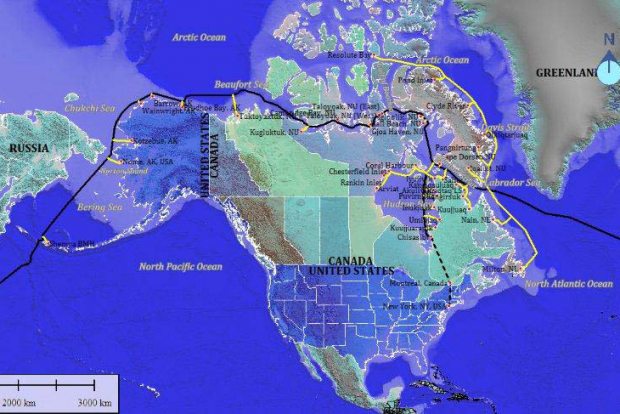 An effort to tie Alaska into a proposed fiber-optic cable snaking between London and Japan has vanished from public view.

But another has risen in its place, raising hopes of much-improved Internet service for tens of thousands of Alaskans.

Broadband Internet access could vastly improve life in many parts of the state, especially in remote communities where signals currently ping over unreliable and slow satellites. In much of northern Alaska, for example, cell phone service on a fiber-optic backbone would leap from 2G to 4G, and the extra traffic could improve everything from telemedicine to distance education.

First, the bad news. The Arctic Cable Co., a partnership between an Alaska Native corporation and a global infrastructure development firm, has gone silent. Its website is dead. Its CEO is gone. Its business license is labeled “noncompliant” by the state.

Officials with Old Harbor Native Corp., the primary Alaska-based partner in the project, did not respond to calls seeking comment.

The project had more momentum in 2010 when the federal government was handing out billions in stimulus checks. The companies had hoped to take advantage of a melting Arctic Ocean, and tap into $350 million in loans and grants to build the Alaska portion of the international sub-sea cable. The section would include Kodiak and Dutch Harbor, the Western Alaska coast and Prudhoe Bay at the top of the state.

But apparently, not enough money arrived. Ethan Berkowitz, a former member of the project development team, said the organizers are “working to receive financing to move forward.”

From Tokyo to London

It would be the fastest subsea cable in the world, said Elizabeth Pierce of Quintillion Networks.

Arctic Fibre recently inked a deal with Quintillion, a newly formed Alaska company that would own the subsea offshoots to Alaska. Pierce, who is Quintillion’s CEO, said the company has support from “East Coast” investors. Quintillion is seeking no public assistance for its Alaska lines, she said.

But sending lines into Kotzebue, Nome, Barrow and Wainwright, as Quintillion proposes, would cost tens of millions of dollars with very little revenue coming back in return from the sparsely populated rural villages.

So how will the project pencil out? A key part of the plan calls for a major extension — through Alaska and to the Lower 48 — that stems off the London-Tokyo line. Part of that extension would run 490 miles from Prudhoe Bay alongside the Dalton Highway to Fairbanks, before heading to the Lower 48.

That route would open up a new path for companies in the mainland U.S. hoping to interact with Asia or Europe, and provide the customer base to help support other costs of the plan in Alaska, said Pierce, who previously worked at Alaska Communications Services for many years.

“Projects that serve just Alaska suffer the challenge of how do you deliver enough revenue to cover capital investment costs and make the service affordable. This is unique because you move international traffic through Alaska,” she said.

But doesn’t the Lower 48 already have enough lines reaching Europe and Asia? Sure, but most enter and exit at the same points, providing little variety and posing risks if, say, a superstorm bludgeons coastal infrastructure.

Alaska Communications Systems has been contracted to do some engineering work on the land-based portion of the line and, alongside other companies, help evaluate “landing sites” in Alaska where the cable comes ashore.

Marine surveys for the international and Alaska routes are scheduled to begin after the ice melts. Plans call for service to Alaska by 2020. Pierce couldn’t disclose costs, but said the Arctic Fibre and Quintillion work will be “far more economical than any other project out there.”

GCI, which bills itself as the state’s largest wireless network provider, is also racing to improve Internet and cell phone service in Northwest Alaska and the North Slope. The company hopes to use a system of microwave towers to extend fiber-optic signals from lines that already course Alaska’s more populated central section.

GCI has already used that system of cables and microwave repeaters to provide faster telecommunications in numerous villages in Southwest Alaska, drawing rave reviews along the way from rural health care organizations. Improved medical services in the region include such things as remote ear examinations, performed by health aides using video otoscopes. The transmitted images can be immediately viewed by doctors in distant cites.

GCI’s ultimate goal is extending that $88 million TERRA Southwest system, launched in 2011, into northern Alaska. Also, plans call for an additional route heading west atop Alaska, with the signal originating at a mainline fiber-optic cable at Prudhoe Bay, and carried along the coast by microwave repeaters and towers.

That microwave backbone would essentially create a high-speed telecommunications ring around rural Alaska, ensuring continuous service even if one part of the line is temporarily broken.

Microwave sites extending the Southwest signal up the coast to Nome are under construction, and GCI has funding to continue toward Kotzebue, said David Morris, GCI spokesman. So far, GCI has spent about $100 million of its own money and received about $44 million in grants for the statewide effort.

Morris said Quintillion’s plans are not a threat to GCI. It remains to be seen if the “enormously expensive” international line and the Alaska connections will be built, Morris said. If they are, the new lines could provide GCI an opportunity to team up with Quintillion, assuming the rates were affordable.

“It’s an idea that’s admirable, but the question comes as to how it’s paid for,” Morris said. “We’d like to have fiber reach every single person in Alaska and every community. It’s just incredibly expensive to do something like that, so we’re looking at things from a business perspective in terms of what’s possible.”

Despite GCI’s plans, Quintillion is pushing ahead. They’re planning to bring a massive signal to rural Alaska.

“We’re looking at 100 gigabytes, but we can expand from there,” Pierce said. “That’s well more than the appetite for bandwidth that’s there now.”

Many rural hub communities in the Arctic see about 20 to 30 megabytes of bandwidth now, said Jens Laipenieks, manager of sales and business development for Arctic Slope Telephone Association Cooperative. The cooperative provides Internet services to nine locations at the top of Alaska, including the oil patch industrial complex at Prudhoe Bay.

“Even 1 gigabyte is unattainable over satellite, so you’re talking a quantum leap here,” Laipenieks said.

The massive signal would allow improvements in learning, such as increased access to virtual classrooms at universities around the country. The chance to see a medical professional via the Internet would improve dramatically for numerous rural Alaska villages without a doctor. Also, government could save money by reducing travel and holding more videoconferences.

“It’s really even hard to put your arms around how big this impact is going to be,” he said.

Quintillion’s concept seems off to a good start, said Laipenieks. “It has some agreements and funding in place that are more solid than what I’ve seen in the past,” he said.

“We wouldn’t have the latency and difficulty getting decent throughput that we do now,” he said.