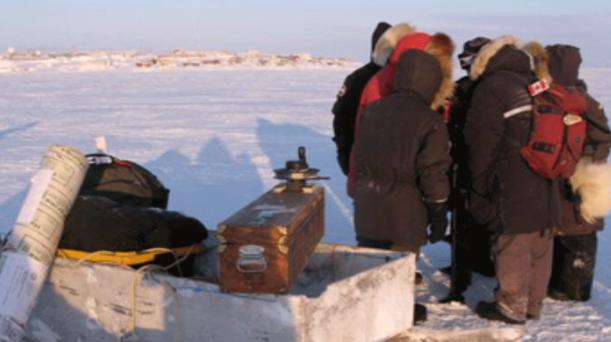 Ocean researchers are working to find out what goes on underneath the thick layers of Arctic sea ice during the winter.

Little is known about frigid Arctic waters during winter months.

For 10 days in -40 C temperatures, the Canadian Rangers Ocean Watch program will be testing the waters and studying how river water flow feeds in the high Arctic ecosystem.

It’s a joint effort between the Departments of National Defence, Fisheries and Oceans, the Vancouver Aquarium and the Canadian High Arctic Research Station.

“We’ll build a picture of the wintertime ocean for the first time,” said oceanographer Bill Williams.

Williams has studied Arctic waters before, but never in the winter. He says projects like this are key to understanding the impact water flow has on life in the Arctic.

“We’re expecting to be able to have a view of the river water that flows into the ocean and how it’s mixed by the tides — ultimately how these processes affect and feed the ecosystem,” he said.

Rangers will monitor during winter

The Canadian Rangers are along for the training. The hope is that they can monitor water flow during the winter months.

“We hope to set up a long term monitoring project in which local people, in this case the rangers, can do sustained environmental monitoring of their own,” Williams said.

Eric Solomon, from the Vancouver Aquarium, hopes to learn from local experts.

“The reality is there’s nobody that understands the Arctic better than the people here in the North and by combining that knowledge with the scientific understanding and finding ways to connect those we can together have a much better understanding.”

Williams says the Department of National Defence is involved because the science of understanding the waters in Canada could strengthen sovereignty claims.

The researchers will be in Cambridge Bay, in Canada’s eastern Arctic territory of Nunavut, before heading out to Hat Island near the Queen Maude Gulf.