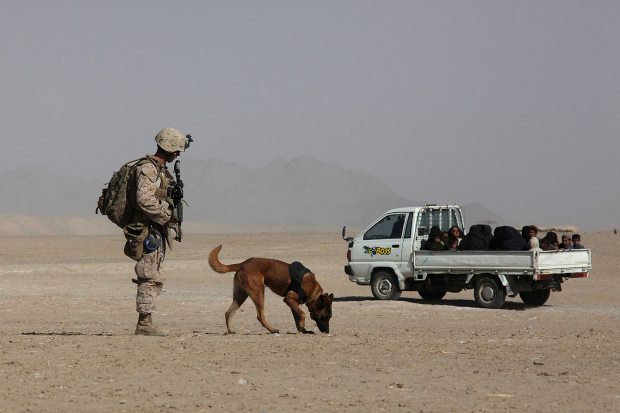 For years, researchers have worked to decode the mysteries of how dogs that race 1,000 miles perform so well — and how to help them.

Research on the physical stamina and the high-performance metabolism of Iditarod dogs has led to changes in the way the animals are conditioned, cared for, fed and rested.

Now, from the wintery reaches of the northern United States, the iconic dogs of Alaska’s Last Great Race are helping keep American soldiers safe in the deserts of Afghanistan.

The same science behind the training of sled dogs has led to breakthroughs in the way the military deploys bomb-sniffing dogs during wartime patrols.

“It makes me sleep at night to know that we are having a life-and-death impact somewhere down the line,” said Oklahoma State University’s Mike Davis, a veterinarian who has spent years studying Iditarod dogs and now works with dogs serving the U.S. Marine Corps. Earlier this month, he was in Alaska tracking Allen Moore’s team during this year’s Yukon Quest International Sled Dog Race.

Davis’ research on gastric ulcers, a condition that can be fatal and sometimes is exacerbated by running long distances, led Iditarod officials to allow dogs to be given Prilosec, an over-the-counter antacid to prevent the condition. Veterinarians have also studied the amount of food dogs need and ideal protein-to-fat ratios. As more is learned, mushers — and now Marines — have adjusted their dogs’ diets.

“The Marine Corps couldn’t believe how many calories (the dogs) were eating,” Davis said. While racing, Iditarod dogs can take in 10,000 to 12,000 calories a day.

Explosive-detection dogs were developed to aid Marines after a 2005 command order to find a way to increase the field dog-presence among human patrols, without adding manpower, infrastructure or extended training, said Lisa Albuquerque, manager of the Office of Naval Research’s naval expeditionary dog science and technology program. Dog noses continue to outperform any other sensor of homemade bombs, with a detection rate as high as 80 percent, while technology-based sensors have a success rate of about 50 percent.

The dog of choice for IED detection is a hunt-bloodline Labrador retriever, an energetic, intelligent and disciplined breed. To be fair, Labradors aren’t an exceptional long-distance sled dog. But the husky-hound mixed breeds that dominate sled-dog races like the Iditarod hold secrets that are helping these very different working dogs improve their battlefield performance.

About two years ago, Army Lt. Gen. Michael Oates said the most effective tool in disarming roadside bombs is “two men and a dog,” even though the military has spent nearly $10 billion on new detection and clearing technologies. “The majority of IEDs are still found by well-trained soldiers in partnership with their host-nation forces and using a dog. That is still the greatest return on investment at this point,” he said.

The military is increasingly embracing the knowledge of chemists, physicists, toxicologists, evolutionary anthropologists and other disciplines, including veterinarians, to inform its work, Albuquerque said.

Train the way you race

One of the biggest lessons from the trails and competitions of Alaska? Train to level at which you need to perform — something Iditarod mushers have come to embrace in recent years, with several dog teams now entering back-to-back, 1,000 mile races. The theory is the more the dogs run, the better they will do. It has worked for Lance Mackey, Aliy Zirkle, Dallas Seavey and others. The military is taking note.

“You need to train the way you are going to race. If you were going to have the dog out there running around in the heat, you need to get them to that point in training,” Davis said.

Battlefield dogs don’t attempt the distances Iditarod dogs cover, and their working conditions are very different. They might travel only 30 miles — but in extreme heat (even triple-digit temperatures) without readily available water. Although desert dogs’ daily routine is much different than sled dogs’, the demands on their bodies are just as great. Using information gained from sled-dog research, Davis has been working with the Marines to develop techniques to keep the dogs in tip-top shape.

IED dogs need to drink about five-and-a-half liters of water a day, water a Marine gets to lug around for his or her animal. Davis is studying just how much water the dogs need to stay alert and capable day-to-day, and whether tweaking electrolyte solutions will reduce dehydration. Some of the work on electrolytes took place this last year at the SP Kennel of Yukon Quest champion Allen Moore and his partner, Iditarod runner-up Aliy Zirkle. Next summer, Davis plans to study how much protein top-performing bomb dogs need.

Nearly 10 years of Department of Defense research into the capabilities of dogs, and the role of sled dogs in acquiring the knowledge, paid off when the call came in to enhance the abilities of the Marine’s IED K9 detection corps.

“As a result of us knowing all of this stuff we were able to very rapidly improve the capabilities of the bomb-sniffing dogs,” Davis said.

Davis appreciates that his work has had tangible results, and the use of Prilosec has helped make the sport of long-distance mushing safer, too. Not a single dog has died during the last three Iditarod races, a standard that was never achieved in the 40-year history of the race before 2010. And the bomb dogs of war are saving the lives and limbs of Marines patrolling behind them.

“This research started as a response to a requirement from Gen. James Mattis in 2005 to do the impossible — find a way to rapidly field hundreds of dogs that could be used by Marines for … detection of IEDs without any increase in manpower, infrastructure or extended training. (It) has saved lives,” said Albuquerque, recalling stories from Marines about how their “experimental” dog saved their patrol and helped them to come home safely.

A new field of the “living sensor” war dogs — called IDD 2.0 (for IED detector dog) — is scheduled to deploy with the Marines to Afghanistan this summer.