Yvonne Echohawk, a pastor and an adopted daughter of Katie John, officiated. Echohawk likened John to Biblical heroines. She said her mother never bowed to bitterness in her fight for Native rights.

Listen to the APRN report:

Former state legislator Georgiana Lincoln read the eulogy, remembering John’s sense of humor, and thanked her for the “blessing to all of us” that followed John’s insistence in 1984 that her fish camp be opened for subsistence fishing.

”Our beloved leader, elder, loved one, Katie John, we mourn your passing. But we smile your contagious smile, knowing you are at last with those loved ones who waited for you, to dance longer, laugh louder, and play harder. Job well done,” she said.

The legal wrangling that followed John’s lawsuit went on for a decade, until Alaska Governor Tony Knowles decided not to fight the case any longer. Knowles could not be present at today’s memorial, but he sent a letter, read by Echohawk, about meeting John at her fish camp face to face.


Friends and relatives of Katie John filled the Anchorage Baptist Temple for the service. Many called her Chook-tay, or Grandma. 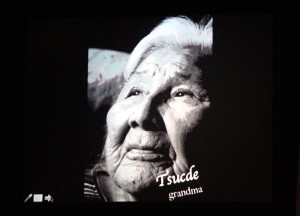 Bob Anderson: “I was Katie’s Lawyer when we started the famous Katie John Case in 1985. She’s an important figure for the upper Ahtna people but she’s really a part of the Alaska Civil Rights Movement, not just Native Right, but Civil Rights – and she’s a sweet kind person too.

Donna Pennington: “I grew up in the village of Mentasta. She adopted me in 1969 in the Village of Mentasta and taught her language in the school during my generation. So we were very fortunate that we got to get the language directly from her.”

Eruera Kawe: “My mother in law was adopted by grandma Katie. So I’m originally from New Zealand. Grandma Katie was an inspiration to us. And not only was she a mother, grandmother, a great grandmother to Athabascan people, but to many other nations around the world.”

David Harrison: “She was my relative. You know when she gave you a hug, you knew things were gonna be okay.”

aboriginal, Alaska, elders, Katie John, North
Do you want to report an error or a typo? Click here!