As 2016 drew to an end, the shortest day has passed in the northern hemisphere, and it should normally be a “cool” time of the year, in more ways than one, especially in the Arctic.

But with temperatures at a record high, sea ice at a record low and feedback loops springing into action, the Arctic is hotting up – and I wish I could say the same for efforts to halt climate change.

North pole near or at melting, strange given 24 h darkness there now, cold space aloft… is all about heat inflow from south @PolarPortal pic.twitter.com/r5C4i28vKR

“(…) North Pole temperatures have climbed to 30o C hotter than normal for this time of year.

(…) Now, in late December, in the darkness of the Arctic winter, air temperatures at the North Pole have actually reached the freezing point, as recorded by weather buoys floating within a few degrees of the pole. As of the morning of Thursday, December 22 (3 a.m. EST), the International Arctic Buoy Programme (IABP), operated out of the University of Washington, recorded temperatures from these buoy up to 0o C or slightly higher.”

“(…) Right now, Arctic sea ice extent is at the lowest level ever recorded.”

Arctic in need of tlc? 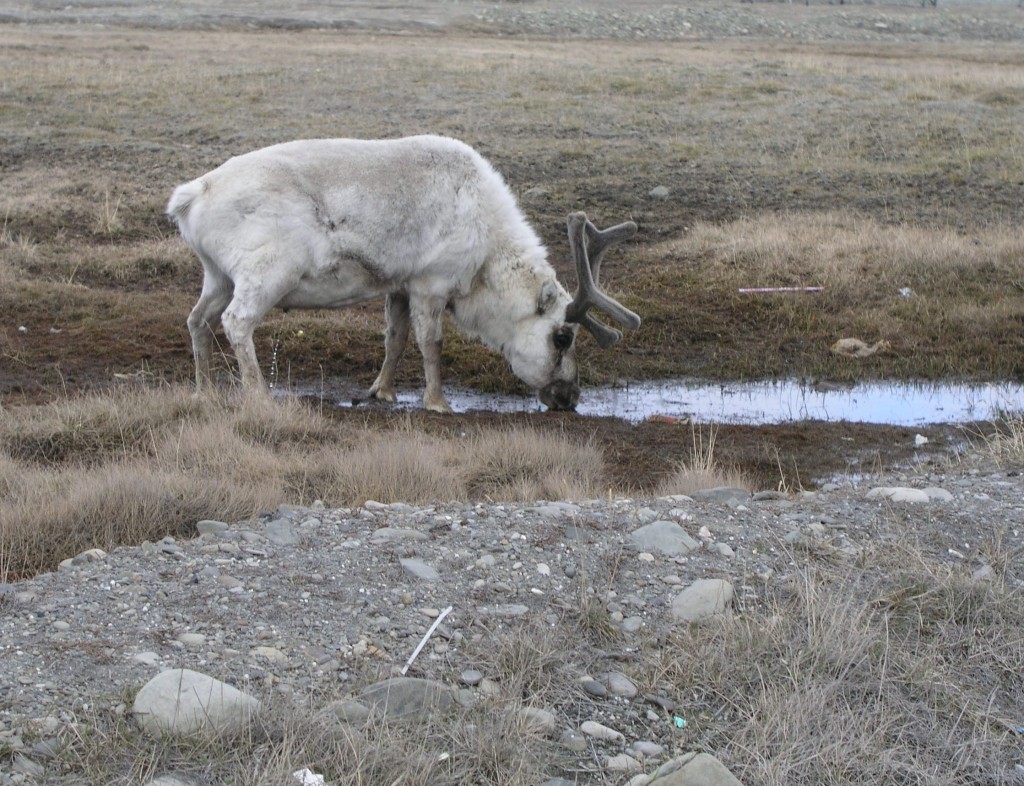 It looks like the Arctic is urgently in need of some tlc – or maybe intensive care would be more fitting.

The Arctic Report Card for 2016 recently published by NOAA should have set alarm bells ringing. Based on environmental observations throughout the Arctic, it notes a 3.5 degree C increase since the beginning of the 20th century. The Arctic sea ice minimum extent tied with 2007 for the second lowest value in the satellite record – 33 percent lower than the 1981-2010 average. That sea ice is relatively young and thin compared to the past.

A “shrew”d indicator of Arctic warming

Let me quote what are described as the “Highlights”:

“The average surface air temperature for the year ending September 2016 is by far the highest since 1900, and new monthly record highs were recorded for January, February, October and November 2016.

Spring snow cover extent in the North American Arctic was the lowest in the satellite record, which started in 1967.

In 37 years of Greenland ice sheet observations, only one year had earlier onset of spring melting than 2016.

Small Arctic mammals, such as shrews, and their parasites, serve as indicators for present and historical environmental variability. Newly acquired parasites indicate northward shifts of sub-Arctic species and increases in Arctic biodiversity.

Getting the message across

The NOAA website sums it up in a video, saying:

“…Rapid and unprecedented rates of change mean that the Arctic  today is home to and a cause for a global suite of trillion dollar impacts ranging from global trade, increased or impeded access to land and ocean resources, changing ecosystems and fisheries, upheaval in subsistence resources, damaged infrastructure due to fragile coastlines, permafrost melt and sea level rise, and national security concerns.

In summary, new observations indicate that the entire, interconnected Arctic environmental system is continuing to be influenced by long-term upward trends in global carbon dioxide and air temperatures, modulated by regional and seasonal variability.”

Margaret Williams, the managing director for WWF’s US Arctic programme had this to say:

“We are witnessing changes in the Arctic that will impact generations to come. Warmer temperatures and dwindling sea ice not only threaten the future of Arctic wildlife, but also its local cultures and communities. These changes are impacting our entire planet, causing weather patterns to shift and sea levels to rise. Americans from California to Virginia will come to realize the Arctic’s importance in their daily lives.

“The science cannot be clearer. The Arctic is dramatically changing and the culprit is our growing carbon emissions. The report card is a red flashing light, and now the way forward is to turn away from fossil fuels and embrace clean energy solutions. Protecting the future of the top of the world requires us to reduce emissions all around it.”

Sack the teacher, kill the messenger?

That was her response to the Arctic Report Card. In my school days, the report card was a business to be taken seriously. A bad report meant you were in trouble and would have to smarten up your act or you would be in big trouble with mum and dad.

The question is – who gets the report, and who has to smarten up their act?

This one should make the governments of this world speed up action on mitigating climate change and getting ready for the impacts we will not be able to halt.

I am concerned that the administration in the wings of the U.S. political stage could be more likely to do the latter. As I wrote in the last Ice Blog post, the new Trump administration is threatening to cut funding for climate research. The proposed new Cabinet is well stocked with climate skeptics.

Financial support for the Arctic Report Card is provided by the Arctic Research Program in the NOAA Climate Program Office. Its preparation was  directed by a “U.S. inter-agency editorial team of representatives from the NOAA Pacific marine Environmental Laboratory, NOAA Arctic Resarch Program and the US Army Corps of Engineers, Cold Regions Research and Engineering laboratory.”

Yereth Rosen, writing for Alaska Dispatch News, quotes Jeremy Mathis, the director of NOAA’S Arctic research program and one of the editors of the report card.

“The report card this year clearly shows a stronger and more pronounced signal of persistent warming than in any previous year in our observational record.”

“We hope going into the future that our scientists and researchers still have the opportunity to contribute and make possible the summary that we’re able to present. So we have every intention of continuing to publish the Arctic Report Card as we have in the past and pulling together the resources and the right people that allow us to do that.”

The debate over President Obama’s announcement that he was making a vast area of the Arctic Ocean off-limits to drilling for oil or gas, shows the dilemma of our times, which could influence the living conditions on our planet for generations to come.

Erica Martinson, writing for the Alaska Dispatch News, provides interesting insights into the debate for those of us who do not live in Alaska.

She quotes Alaska’s Republican Congressman Don Young, saying he used “livid language” in his response. Obama’s move means “locking away our resources and suffocating our already weakened economy.”  He goes on “Alaska is not and should not be used as the poster child for a pandering environmental agenda.”

She also quotes Republican Senator Dan Sullivan  as describing the move as “one final Christmas gift to coastal environmental elites”.  So would those be the indigenous communities being forced to relocate because climate changes are destroying their homes, Senator?

The administration, on the other hand, says it is protecting the region from the risk of a catastrophic oil spill, Martinson writes.

It seems to me that Obama’s parting gift goes rather to the “Alaska Native communities of the North Slope” who “depend largely on the natural environment, especially the marine environment, for food and materials,” and to the many endangered and protected species in the area, “including bowhead and fin whales, Pacific walrus, polar bear and others.”

What about the Paris Agreement?

But as well as that regional aspect, the decision not to open up new regions to drilling for oil and gas is in line with the global need to cut fossil fuel emissions to halt the warming of the world.

Jamie Rappaport Clark, CEO of “Defenders of Widife,” puts it:

“It marks the important recognition that we cannot achieve the nation’s climate-change goals if we continue to expand oil and gas development into new, pristine environments like the Arctic and Atlantic Oceans.”

The World Meteorological Organization (WMO) says 2016 is on track to be the hottest year on record. According to UN estimates, the global temperature in 2016 was 14.88 C – 1.2 degrees higher than before the industrial revolution began in the mid-19th century.

“Warming effects in the Arctic have had a cascading effect through the environment. We need people to know and understand that the Arctic is going to have an impact on their lives no matter where they live.” That includes the oil-industry-friendly and climate sceptical team that is set to enter the White House in the New Year.

So when I propose a toast to a cool Arctic in 2017, I am not just thinking of my friends in the High North. For all our sakes, we have to kick our fossil fuel habits, save energy and cut the emissions which keep the giant refrigerator that helps make our world a viable place to live well chilled.

Scots-born journalist Irene Quaile works as Correspondent for Environment and Climate Change with Deutsche Welle, Germany’s international broadcaster. She has also worked for German national radio, Radio Netherlands, the BBC and ABC Radio National, Australia. Irene has received several international radio prizes , including a New York International Radio Festivals gold medal and a United Nations gold award for outstanding radio. She has travelled widely to countries including Mongolia, Laos and Tanzania, working on development and environment-related issues. Since 2007 she has been specialising on the Arctic and made trips to the Arctic regions of Scandinavia, Alaska and Greenland, making radio and online features on climate change and its impact on ecosystems and people. The Ice Blog was created during a trip to the Alaskan Arctic in 2008. Read Irene Quaile's articles

516 ♥ Is Norway's farmed salmon as healthy as we think?