Luostari was once the Soviet Union’s nearest airfield to NATO territory. Now, the nearby ghost town of Korzunova could be one of the most lucrative private housing areas on the industrialized Kola Peninsula, in Northwestern Russia.

It’s empty now. Silent and strange. Bushes and trees start to grow in between the pavers and concrete pads that once formed the runway and placements for warplanes. The amount of plastic garbage may surprise you, where does it all come from? There are very few people here nowadays. The several square kilometers large closed-down airfield isn’t exactly the main picnic destination for people in the Pechenga region near Russia’s border to Norway.

Korzunovo is the name of the town serving Luostari air force base. Until about the year 2000, the base with the military airport code XLML was home to fighter jets and bombers. From here, Norway is 16 kilometers away, or less than a two minute flight after take-off. Nowhere did the Soviet Union have warplanes ready for missions closer to NATO than up here in the north. In addition to eastern Turkey, this was the only place the USSR had a direct land-border to a NATO member. Some few tens of kilometers east of Luostari are the bases for the Northern Fleet’s strategic nuclear powered submarines. Keeping them safe from possible enemy attacks has always been of highest priority.

A few thousand people lived in the town of Korzunovo. Mainly pilots and officers serving the aircraft and airport. When the air force wing was redeployed, the apartments blocks and town infrastructure was left almost uninhabited. Empty deserted houses in a row along the main street create an image of a ghost town. Not totally so, the yellow school bus still drives the street and a small shop still keep its doors open. A post office is inside one of the apartments blocks, though hard to find. There are some 250 people living in Korzunovo.

We have already provided about 100 plots of land.

Now, the town eyes a second birth as the municipality has started to offer plots of land for private housing construction. This became possible as the Ministry of Defense transferred the land to the local civilian authorities, TV channel GTRK Murman reports. Already, a few private houses and dachas (country houses) are under construction.

“We have already provided about 100 plots of land”, Head of Korzunovo municipality, Roman Terekhov, says to the TV channel. He tells that the people interested are either people from the settlement or people today living in the nearby town of Zapolyarny. Infamous for its pollution with bad air quality, the mining town of Zapolyarny is just a 10-15 minutes drive from Korzunova. Standing on the former runway, Zapolyarny is visible, but not smellable, in the horizon. Another 20 minutes drive to the west is the even more polluted town of Nikel.

Private houses, making a new birth to the military ghost town, are not as common in the Russian north as in the country’s southern regions. Except some few tens of luxury houses in the hill overwatching Murmansk and some old wooden houses in the rural areas along the White Sea coast, you can hardly find anyone at all on the Kola Peninsula.

Looking away from the abandoned airfield and the ghost town apartment blocks, the location of Korzunova is a beauty spot in the Arctic taiga forest. Unlike the ecological disaster zones near Zapolyarny and Nikel, the nature here is green and fresh. The shallow Pechenga river flows free and is famous for its salmon catches. Just down the hill is the newly reconstructed Pechenga monastery with all its picturesque orthodox log buildings looking similar to how the monastery was before the Swedes burned it down 450 years ago.

The town has also written itself into world history being Yuri Gagarin’s hometown for nearly three years; from 1957 to 1959. Lieutenant Gagarin was then a pilot with the Northern Fleet’s 169th fighter regiment deployed at the air field. Gagarin was soon recruited to the Soviet Union’s cosmonaut training program and became the first human in space in April 1961.

Gagarin still shines glory to what’s left of the town. Driving along the main street, his golden bust stands across the road from the town administration, just under the wings of an old greenish propeller plane on display. A small, but highly informative museum honoring Gagarin is open for visitors. Although you have to make an appointment for the museum to open. Korzunovo doesn’t get that many visitors from outside, yet. At the museum, you learn that Yuri Gagarin and his wife Valentina’s elder daughter, Elena, was born in Korzunovo in April 1959. Elena Gagarina is today Director of the Kremlin museums in Moscow.

The local school in town serves the surrounding military garrisons like Lower Luostari, Upper Luostari and 19 km where Russia’s 200th Motorized Rifle Brigade is located. Happy pupils disembark the yellow school bus; not all children in the world have a huge closed down airfield as the nearest playground. The abandoned terminal building is just a few hundred meters from the school yard. For one or another reason, the flight control tower is still manned. A woman, most likely not educated as flight control officer, is sitting behind large windows at the top of the tower. Watching nothing else than the empty airstrip and ruins of other buildings along the apron and taxiways.

Visited by the Barents Observer a few years back, the woman in the tower was not very communicative when understanding a foreign reporter was walking the airfield. There is a kind of audible silence as you walk across the more than two kilometers long runway. Half fallen brick walls at the different buildings, the half demolished hangars, ammunition bunkers, scrap metal everywhere, the walk is really a tour through Cold War history. A kind of outdoor museum. You can perfectly well imagine the final call over the speaker system: “Hi guys, the Cold War is over! Take your aircraft and other valuable equipment with you and let’s take-off and move away from here. Away from the Norwegian border. Final bording call. Bye, bye Luostari.”

The victory of communism is inevitable.

All planes from the base were moved to Severomorsk-1 near Safonovo north of Murmansk around the year 2000. With the departure, all landing lights, radio-communication gear and radars were demolished and moved away. The shadows of the past, however, are still visible. «Peace on earth. We protected our freedom in fight,» reads a slogan on a wall of one of the abounded houses. Another reads “The victory of communism is inevitable.”

Although the military presence is history inside the town, the outskirts are still important for Russia’s Arctic brigade under command of the Northern Fleet. A road-sign in the end of the main street of Korzunova points you in the direction of the “Tankodrom”, a training area for tanks. Also other heavy military vehicles use the area for exercises.

You can see more photos from Korzunovo and the surrounding area in the image gallery under. All photos in this article are taken some few years ago. 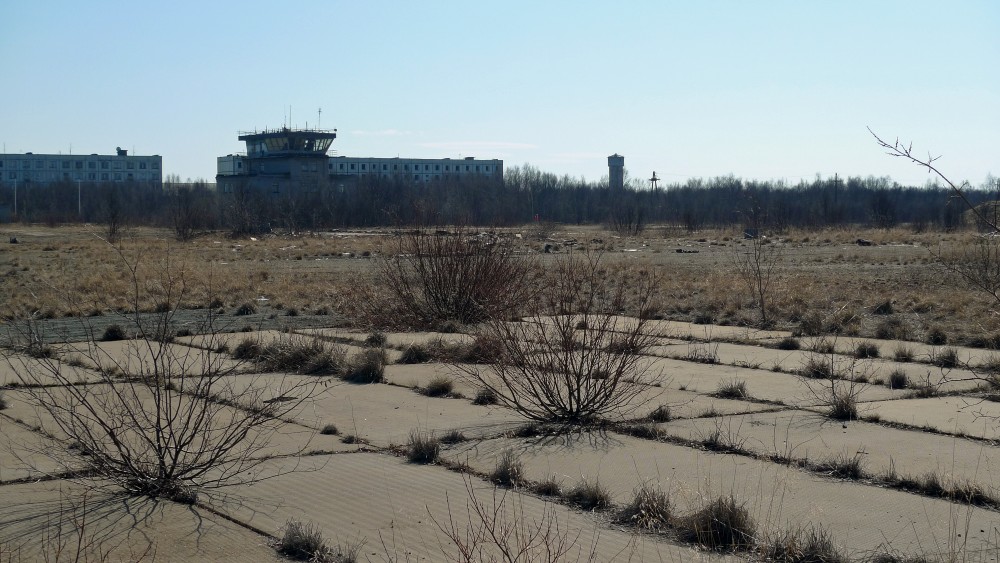 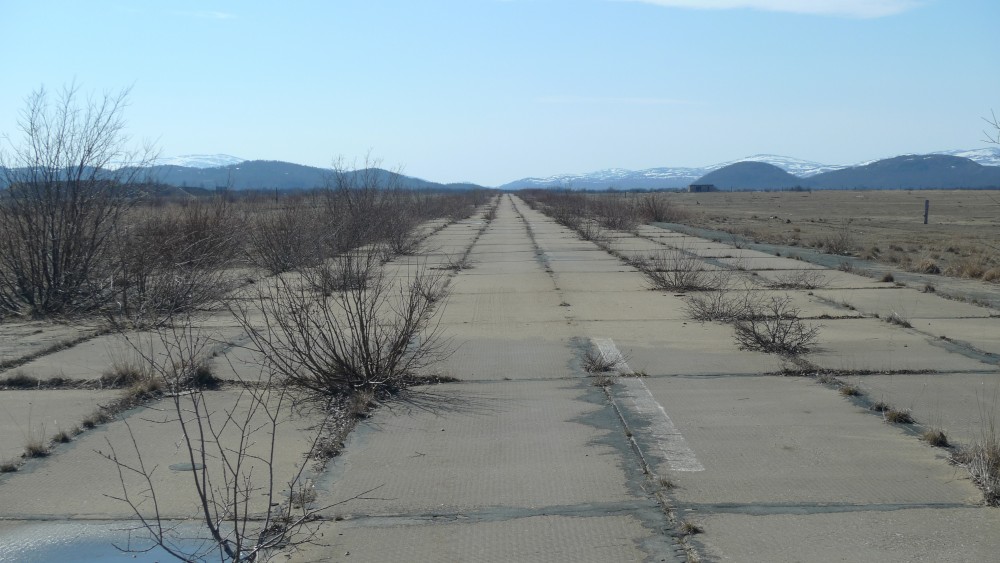 Once upon a time, a busy runway for warplanes. (Thomas Nilsen/The Independent Barents Observer) 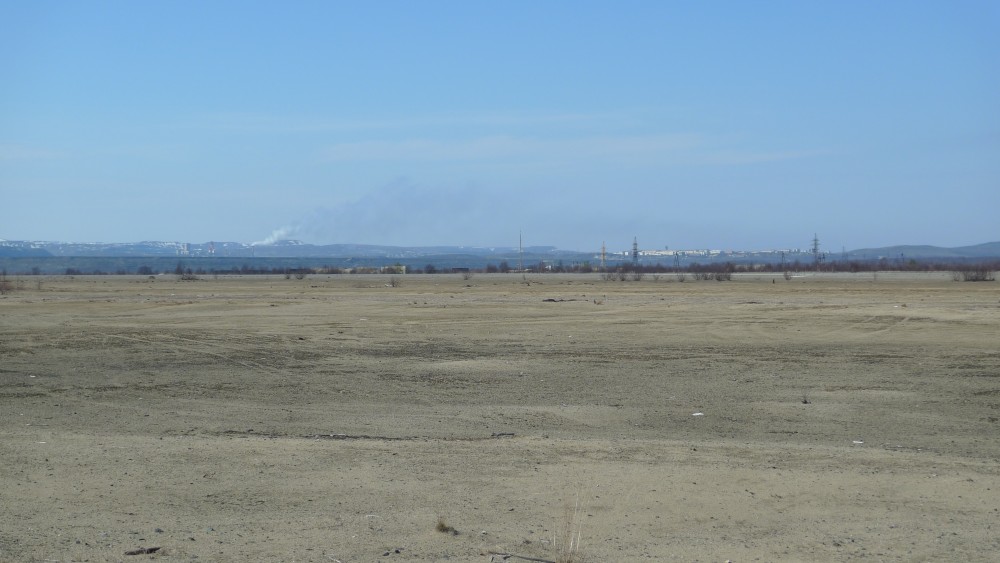 The mining town of Zapolyarny visible in the horizon from the huge closed down air base. (Thomas Nilsen/The Independent Barents Observer) 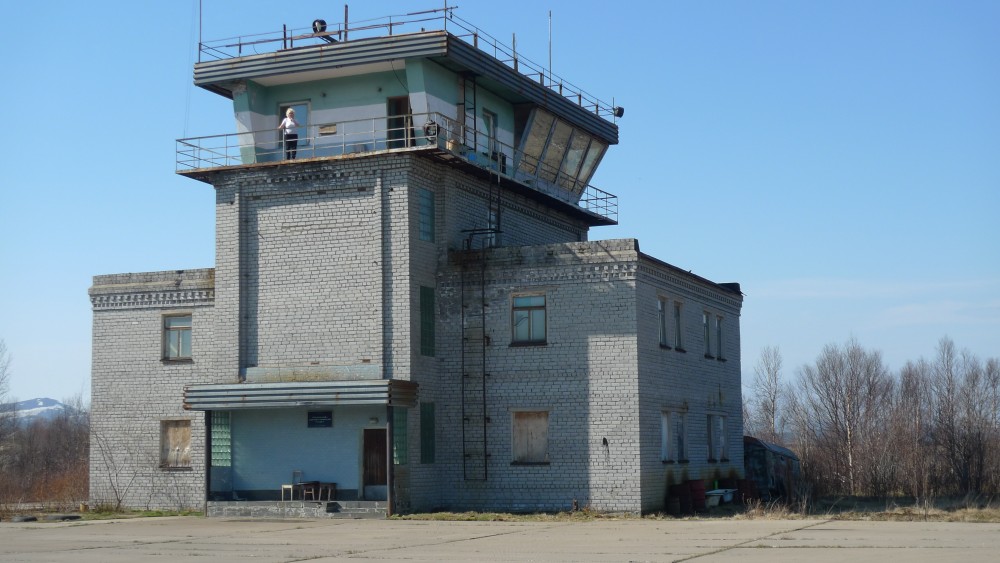 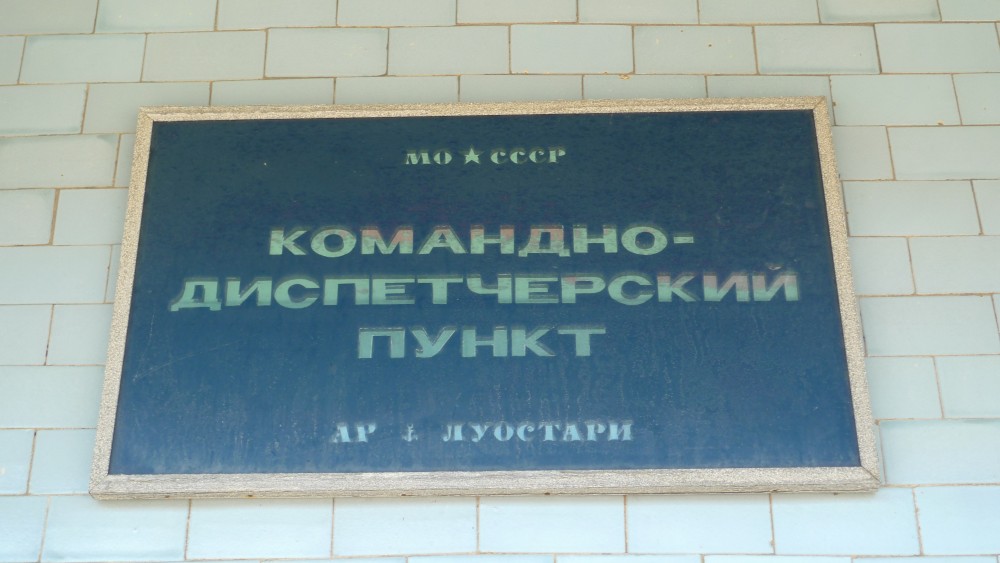 A plaque on the wall of the control tower. (Thomas Nilsen/The Independent Barents Observer) 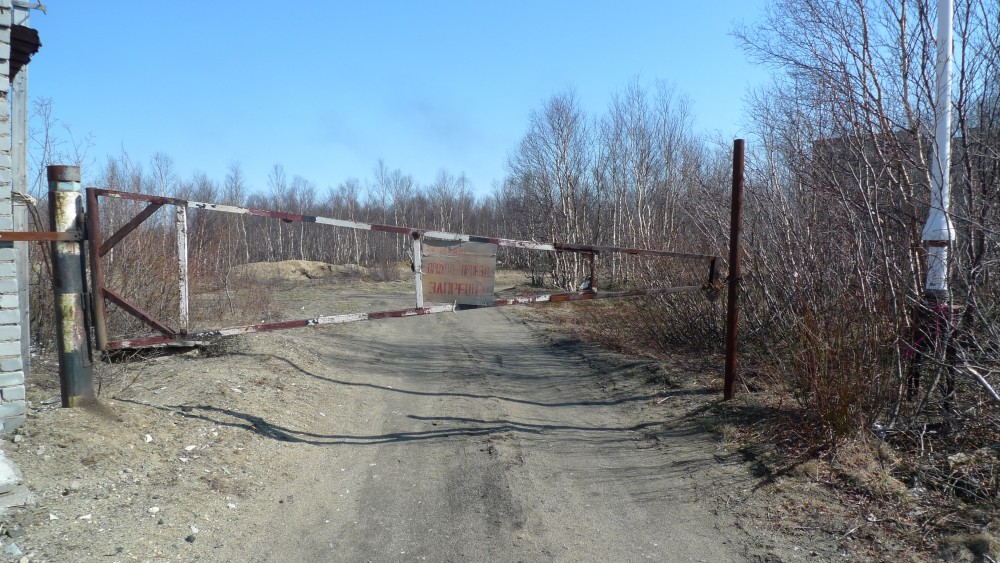 Once upon a time, a Soviet military check-point. (Thomas Nilsen/The Independent Barents Observer) 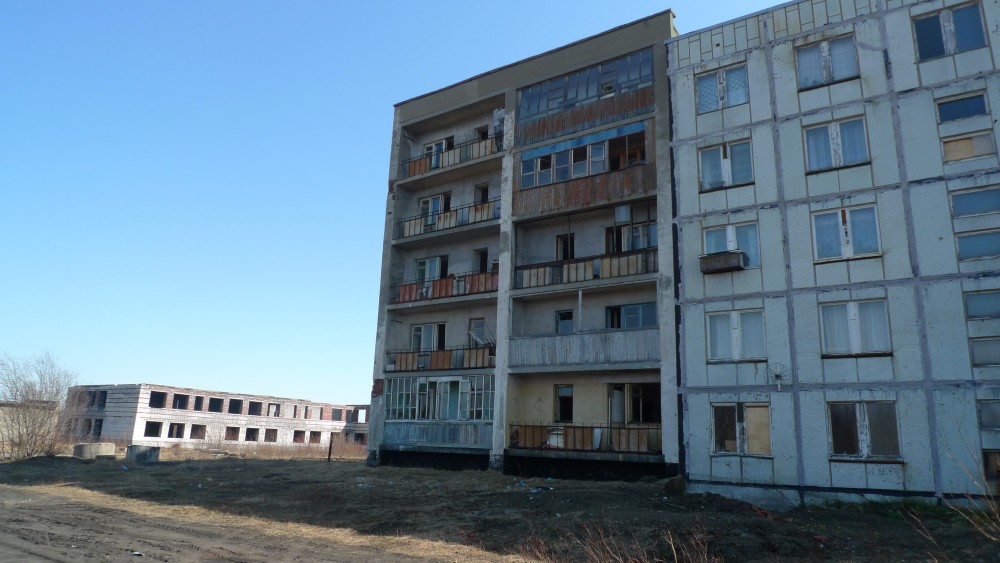 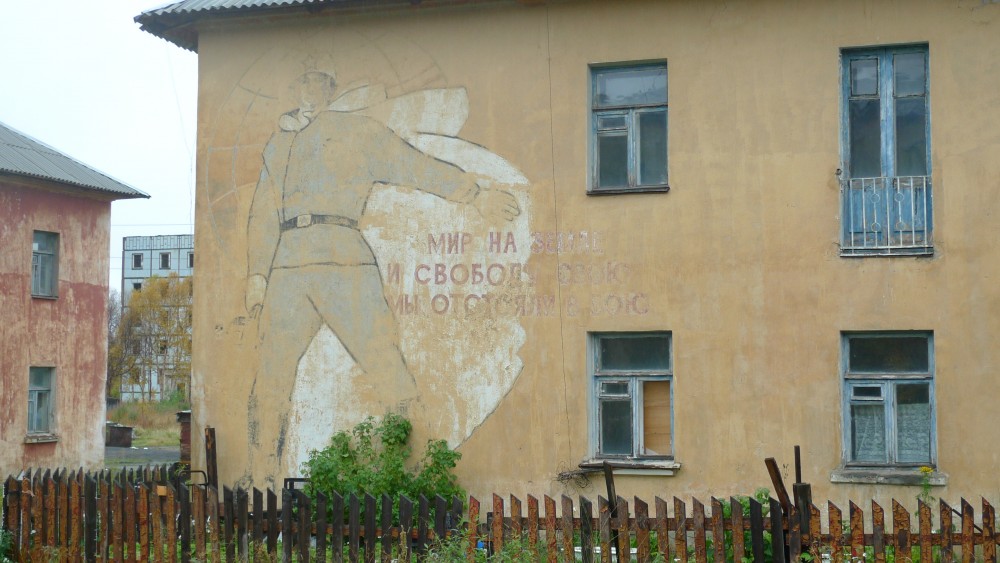 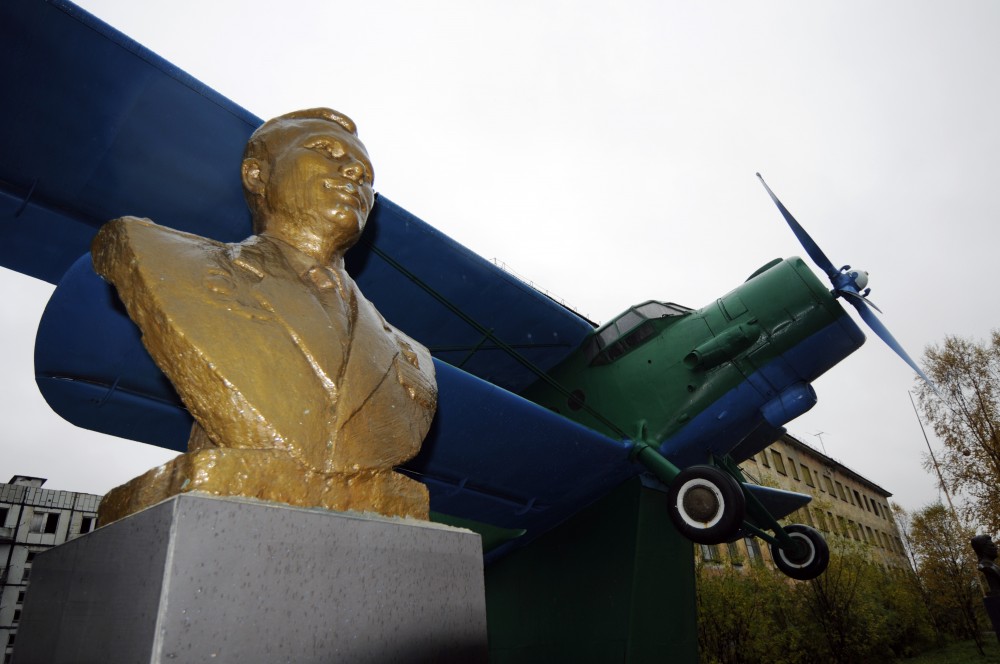 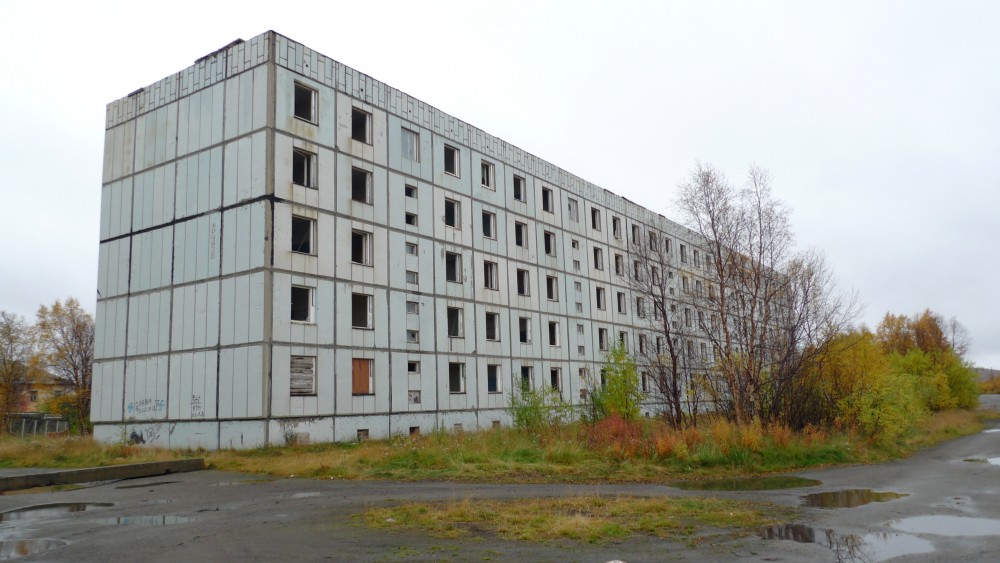 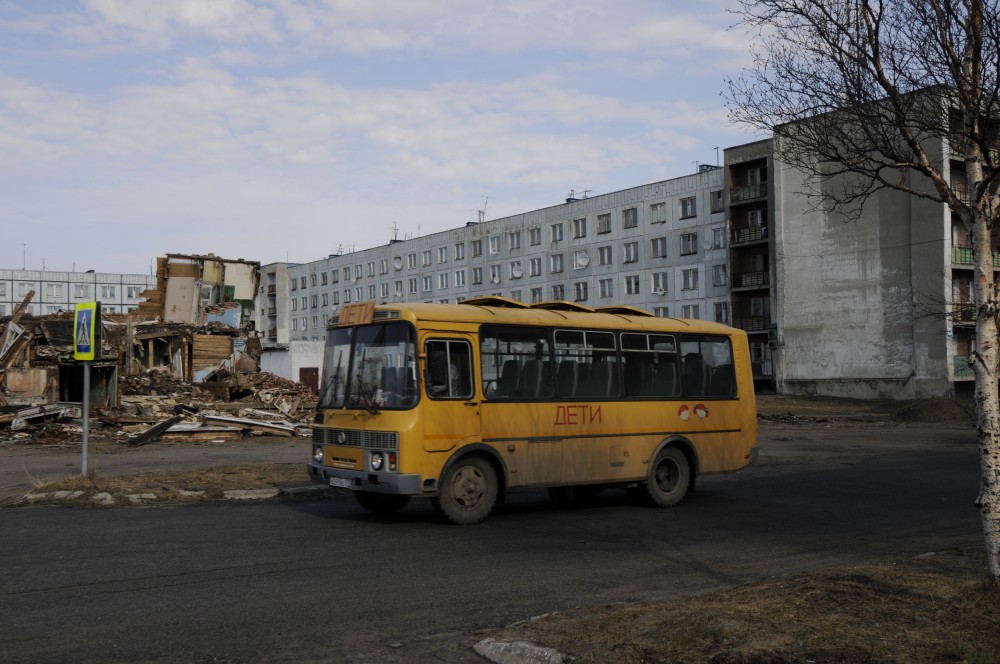 School bus in front of on of the few apartment blocks where people still are living. (Thomas Nilsen/The Independent Barents Observer) 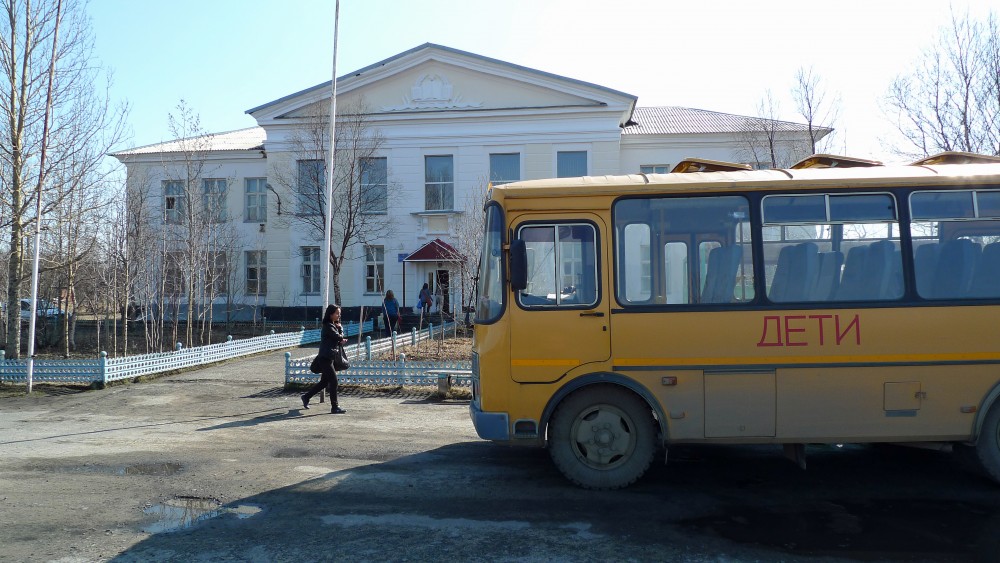 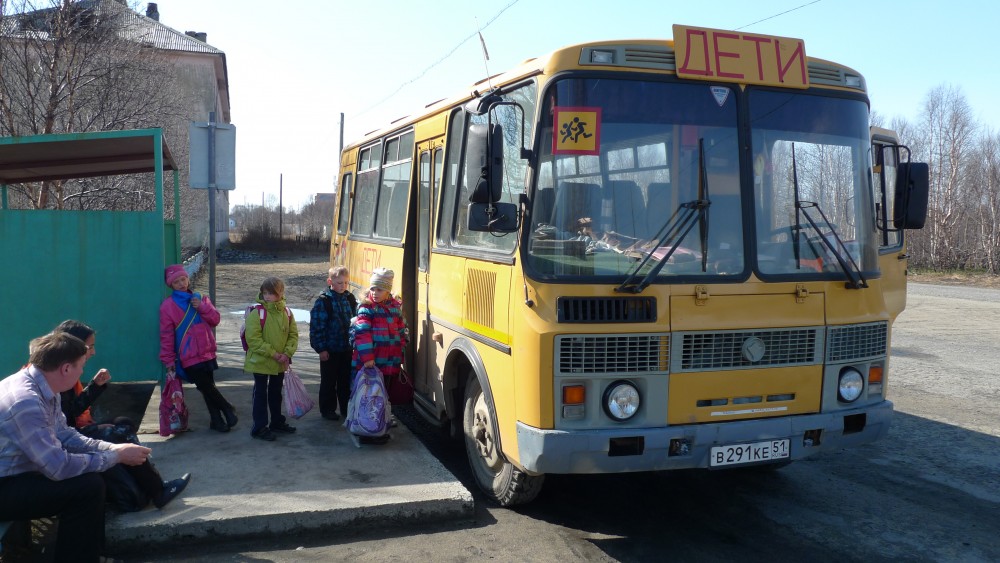 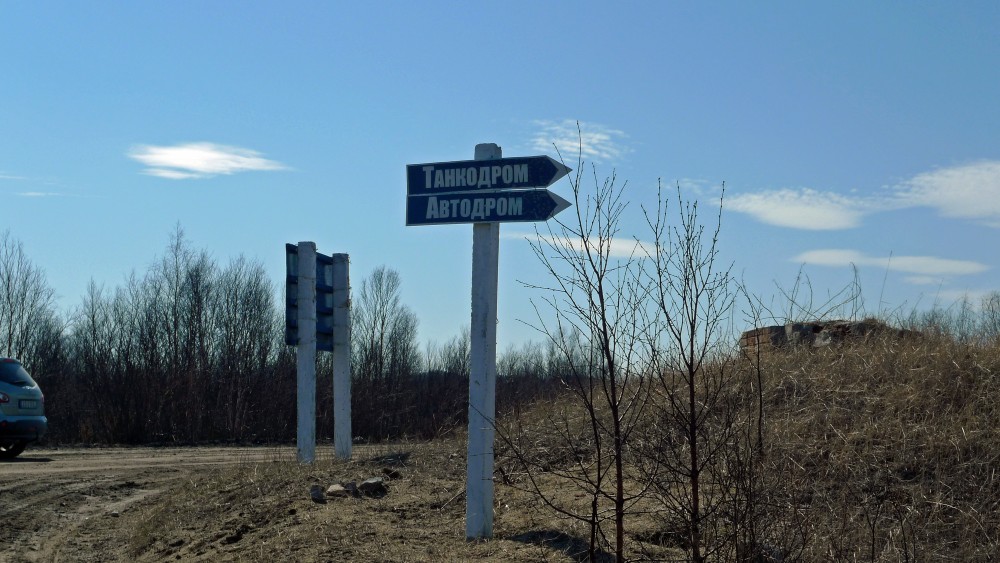 “Tankodrom” – Roadsigns in Korzunova are not like in any other towns. (Thomas Nilsen/The Independent Barents Observer) 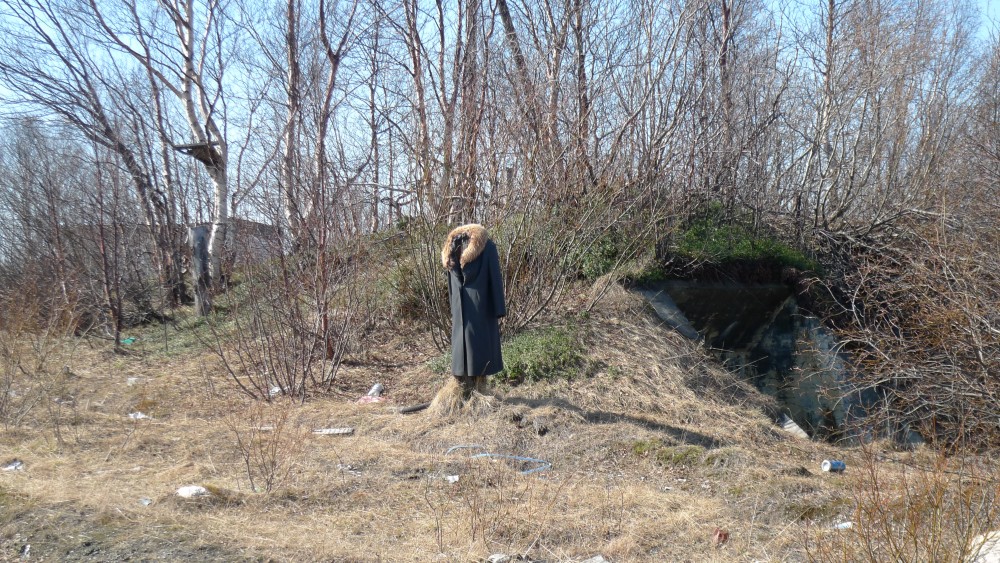 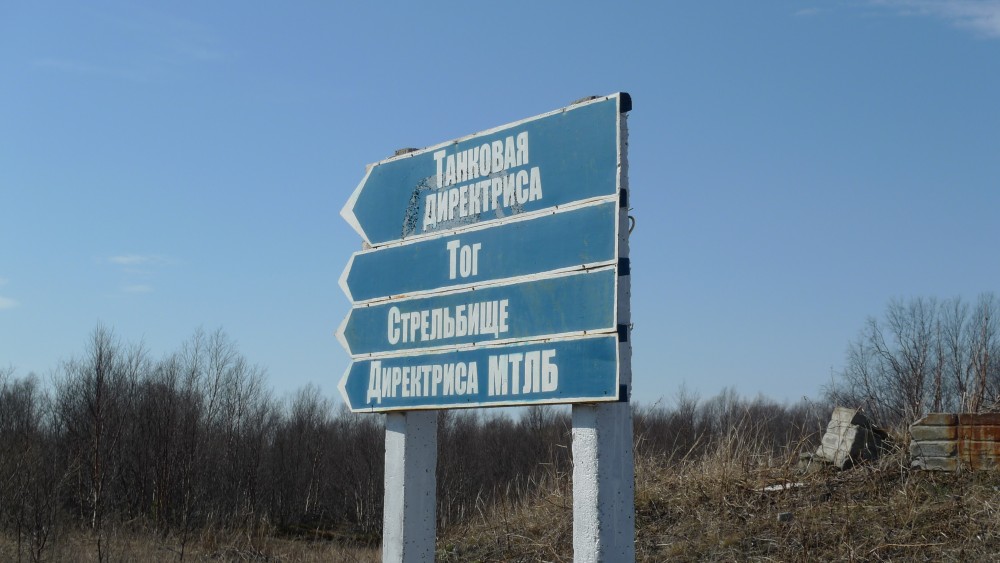 There are still some military activities outside of Korzunova. (Thomas Nilsen/The Independent Barents Observer) 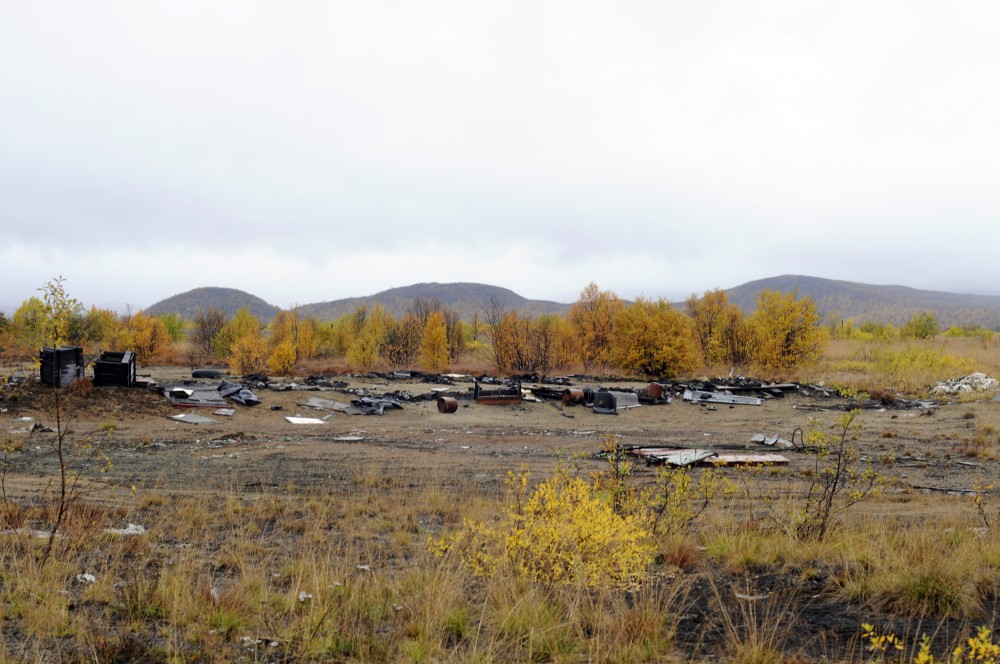 Scrap metal from installations once upon a time important for the Soviet air force. (Thomas Nilsen/The Independent Barents Observer) 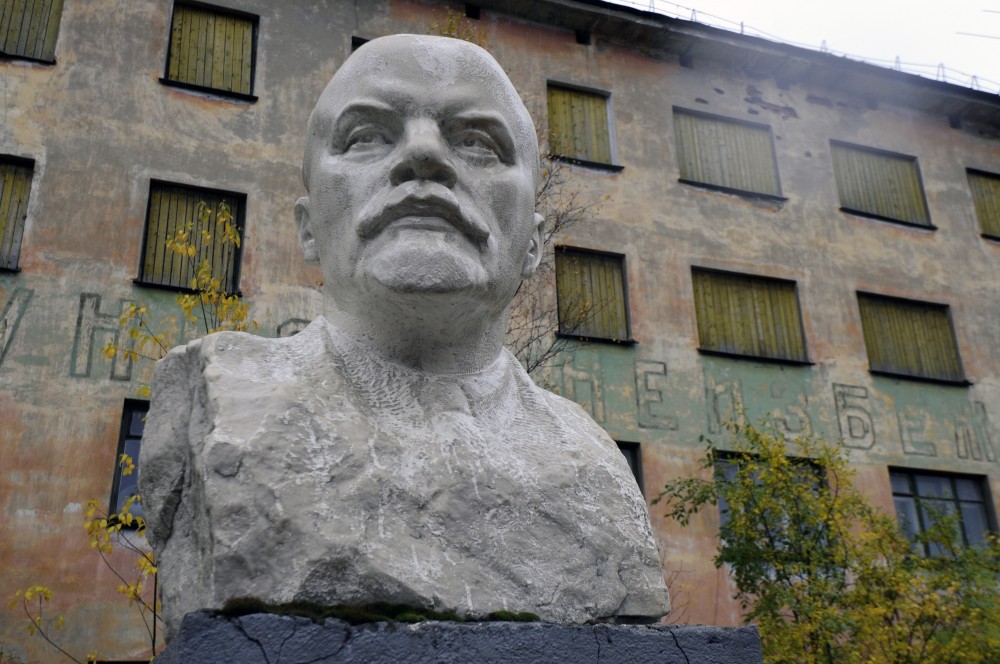 Corroded bust of Lenin stands in front of one of the abounded buildings in the town center. (Thomas Nilsen/The Independent Barents Observer) 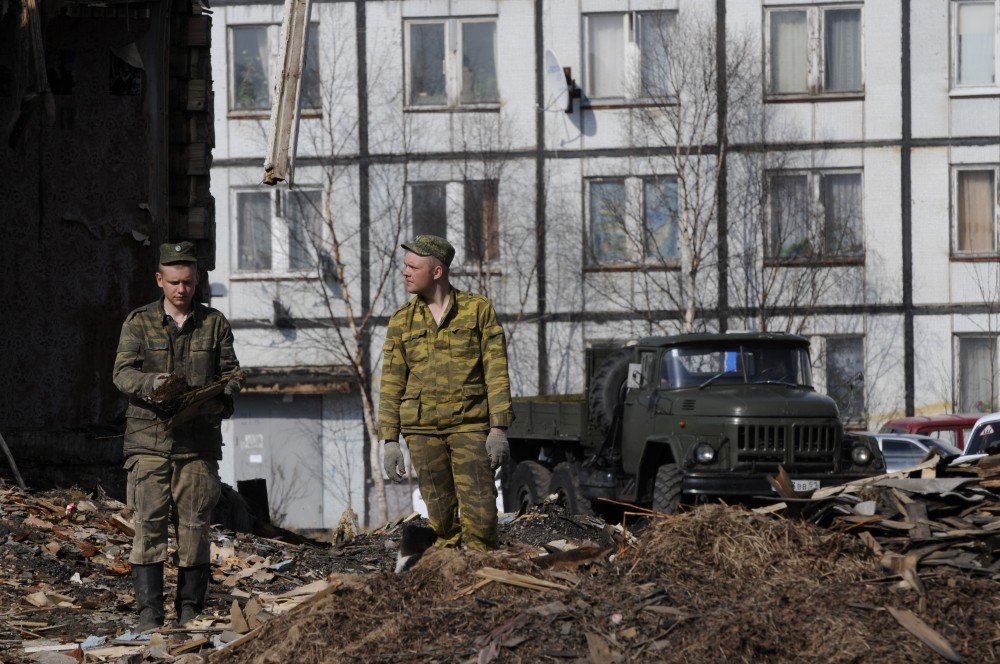 Workers tear down some of the old houses in the center of Korzunovo. (Thomas Nilsen/The Independent Barents Observer) 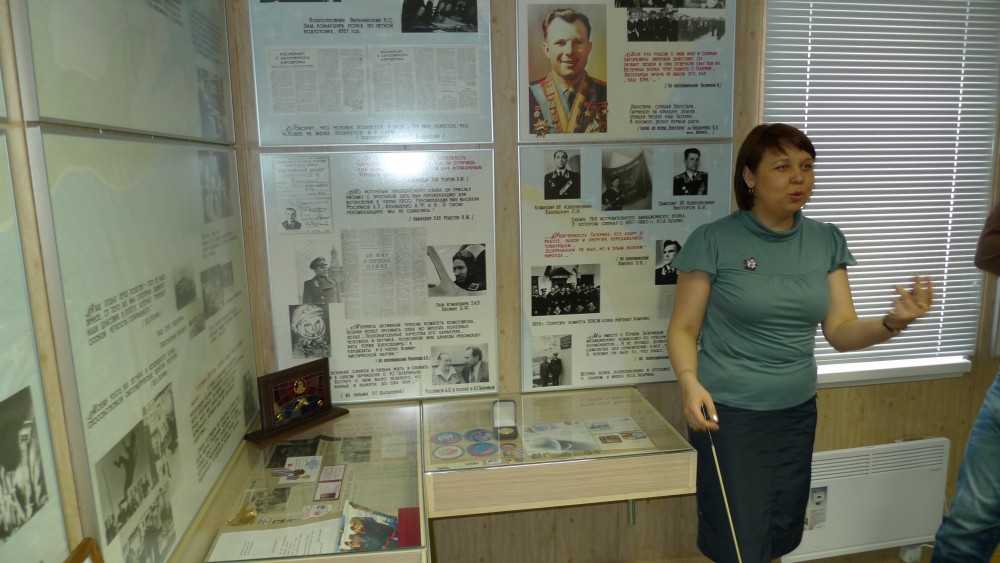 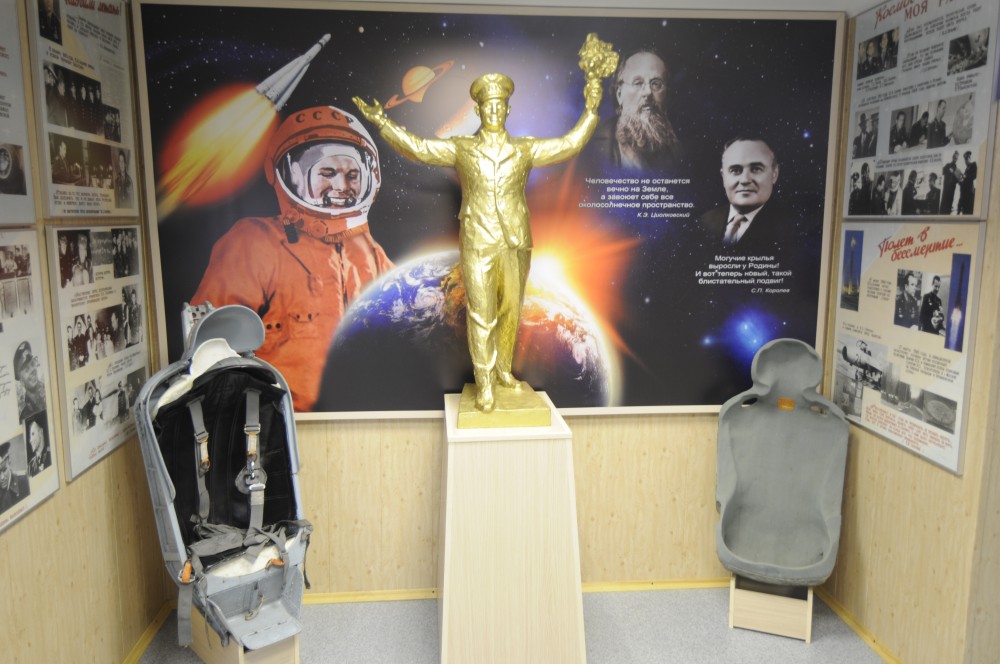 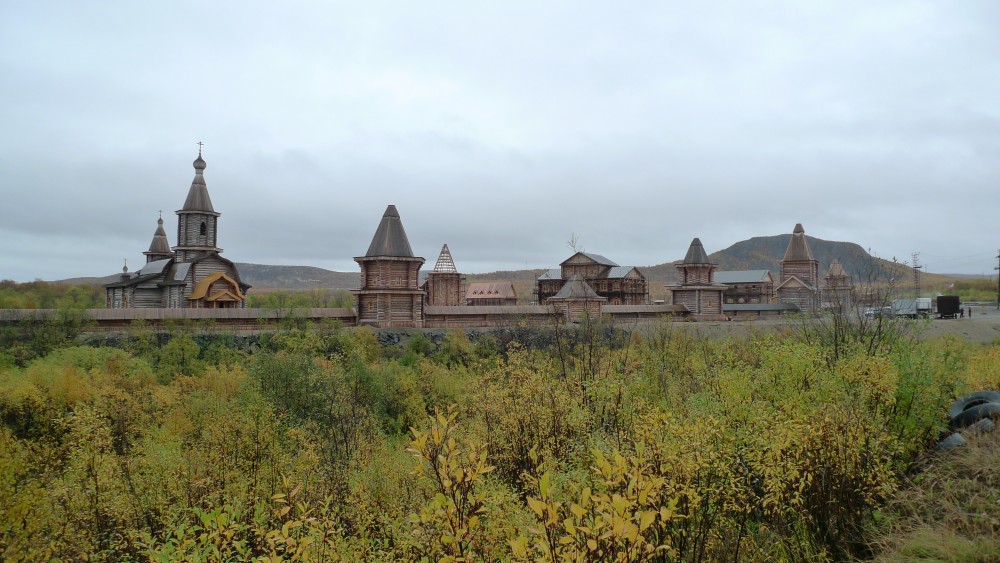 Norway: Will NATO save important air base in Norwegian Arctic?, The Independent Barents Observer