The past four years have been the hottest on record, but new research shows the Earth was actually in a global warming “hiatus” that is about to end. And when it does, natural factors are likely to help an already warming planet get even hotter over the next four years, according to a new forecasting model.

Rising CO2 levels have caused the temperature of the planet to rise, said lead author of the Nature Communications paper, Florian Sevellec, a professor of ocean and Earth science at the University of Southampton in the United Kingdom and a scientist at France’s National Centre for Scientific Research. 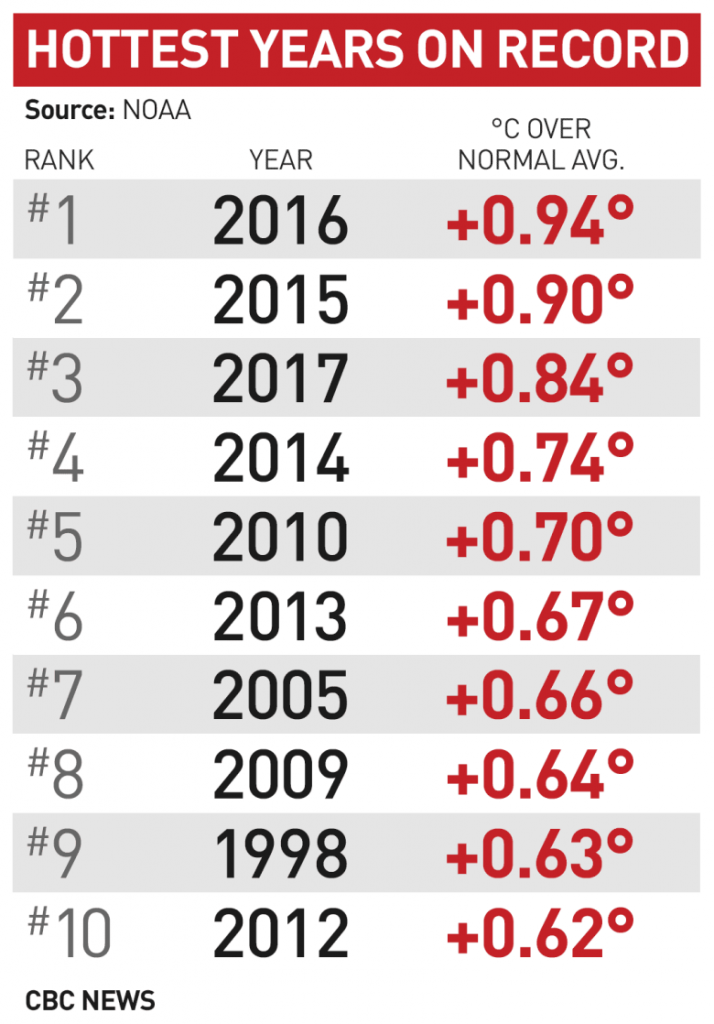 However, Earth’s natural cycles, which include events like El Nino and La Nina, can also influence global temperatures.

And while Earth seems to have been running a fever for almost a decade straight, the natural cycles have been in their “cooling” phase, Sevellec says — and that’s about to shift, raising the global temperature further.

“It will be even warmer than the long-term global warming is inducing,” Sevellac said.

This cooler phase of the planet’s natural variability is responsible for what is often referred to as a global warming “pause” or “hiatus.” While the planet continued to warm, it seemed to plateau.

But that had to end sometime.

John Fyfe, senior research scientist at the Canadian Centre for Climate Modelling and Analysis at Environment and Climate Change Canada, says that multiple issues were at play but mainly the natural variability of the planet.

“I’m not at all surprised by the results,” Fyfe said of the new study, in which he was not involved. “And the reason for that is that we have gone down this long slowdown period primarily due to internal variability, and the expectation was that we’d come out of it.”

Though CO2 levels were still increasing in Earth’s atmosphere, natural cycles like the El Nino Southern Oscillation (ENSO) in the Pacific Ocean were cooler than normal and offset rising global temperatures.

But, Sevellac says, “the long-term trend was building up.”

This doesn’t mean, however, that we can point to a specific area and better forecast, say, heat waves. Instead, this is a global measurement. But with the Earth continuing to warm, the chances increase for these events.

And global warming doesn’t mean that every location on the planet warms uniformly — there are some regions that can be colder than normal — nor does it mean that each year is hotter than the previous one. Instead, it’s an overall trend that can play out within a decade or more, with the temperature of the entire planet rising over time.

In order to test the ability to predict future climate outcomes, the model employs a method that looks backward. In this case, it was able to predict with accuracy the climate slowdown that occurred around 1998 and onward to roughly 2014.

But it’s important to note that this is a probability, not a certainty.

“Because we tested it over the last century, we know that we are accurate for the likelihood,” Sevellac says. “But the likelihood doesn’t mean it will occur … there exists a small chance of being cold.”

We could already be seeing a shift: after a record-breaking El Nino year just two years ago in 2016 — which caused heat waves, coral bleaching, drought and flooding around the world — the U.S. Climate Prediction Center is forecasting a 70 per cent chance that another one is on its way this winter.

There’s no telling how long the cycle will last, if it does manifest: it could be five years or 10. But what’s important to note, Sevellac says, is that rising CO2 is still the key player in the warming of the planet.

Canada: Warming Arctic could be at heart of deadly July heatwave, CBC News

Russia: Record heatwave in the Arctic, The Independent Barents Observer

One thought on “Global warming ‘pause’ about to end, raise Earth’s temperatures further”