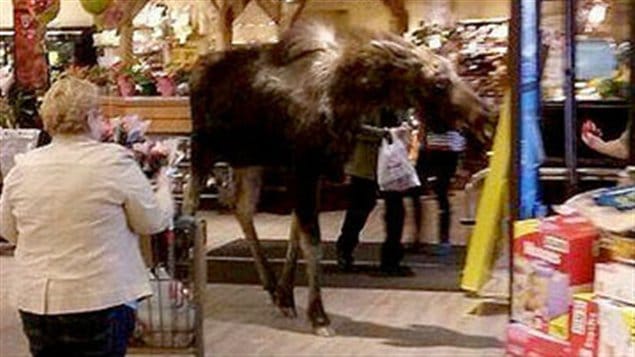 When nature comes to visit

Shoppers in the town of Smithers, in the central interior of British Columbia had a bit of a surprise yesterday evening.

A moose was seen in the parking lot of a grocery store apparently attracted by some spilled produce at the side of the building when shoppers began rolling apples toward it, which the moose seemed to enjoy.

It then simply followed people into the store, the automatic, motion-activated doors obligingly opening to allow the animal to stroll inside.

It seemed very calm as it wandered briefly around the store as evidenced by a mobile phone video shot by a customer.

Although it seemed incredibly calm, a wild moose in confined quarters has the potential to be very dangerous and cause a great deal of damage.

The animal was lured back outside by an employee holding an apple in his hand to get the moose to follow him.

It should be noted that Smithers is surrounded by forests with the Rocky Mountains clearly visible nearby.

UPDATE: FRIDAY:  Since yesterday, more news, and a bit sad news at that, has become available.  BC wildlife conservation officers  say moose are often infested with ticks at this time of year which can weaken them and make them lethargic, and easier prey for wolves.

They add that it is not unusual for moose to be seen around town at this time of year as they look for easier sources of food and away from wolves.

In this case, once the moose was led outside the store, the conservation officers tranquilized it in order to  transport it back to the woods. They say they observed the moose for several hours but that it had been too weakened by ticks and that it later died.

They also say it is always important for people not to attempt to feed any wild animal.

In this case, once the animal was outside the store, they tranquilized the moose in order to  transport it back to the woods, but later reported the animal had been weakened by ticks and they say they observed the moose for a couple of hours but that it died. They also say it is important for people not to attempt to feed any wild animal.