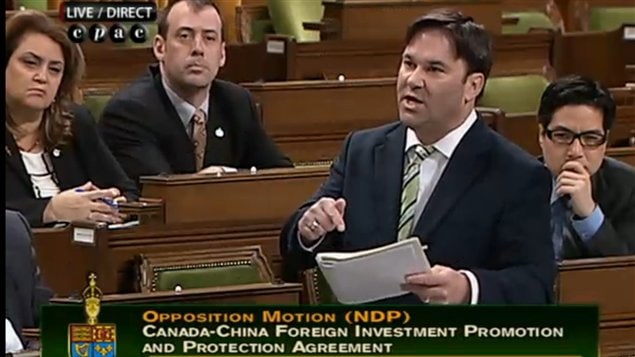 Canada’s Official Opposition NDP party is calling on the Canadian government to inform China that it will not ratify the Canada-China Foreign Investment Promotion and Protection Agreement (FIPPA) in its current form.

MP Don Davies, the NDP’s international trade critic, presented the party’s motion Thursday morning (April 18): “That, in the opinion of this House, the government should inform the Government of the People’s Republic of China, that it will not ratify the Canada-China Foreign Investment Promotion and Protection Agreement.”

The outright majority of the ruling Conservative government of Prime Minister Stephen Harper means the motion will be defeated, but because the Official  Opposition chose this as the opposition question, government and opposition MPs are obliged to discuss the motion through the day.