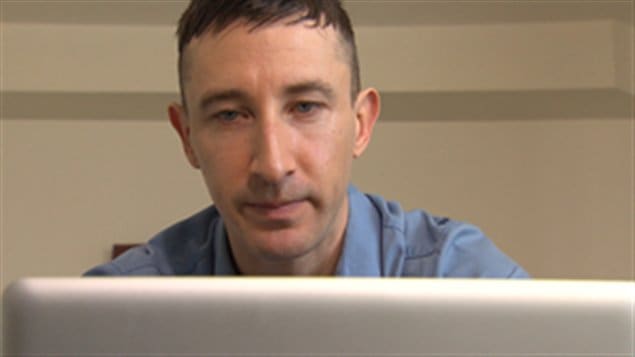 For several months after the cyberstalking began, Lee David Clayworth said he started every day by checking to see what defamatory material his ex-girlfriend had posted about him overnight.
Photo Credit: CBC

A Canadian teacher seems powerless to stop an ex-girlfriend from posting countless defamatory and offensive comments about him on the web. The postings are harming his search for a job, says 35 year-old Lee David Clayworth.

Clayworth was teaching in Malaysia when he dated Lee Ching Yan for several months in 2010.  After they split up he says she broke into his apartment and stole his laptop and hard drive. She used this to send messages to all of his contacts saying he had had sex with young students. That was the beginning of a relentless series of derogatory comments about him on the web.

A Malaysian court ordered posts taken down and later convicted Lee Ching Yan of contempt for not obeying the order.  She was ordered to pay Clayworth the equivalent of $66,000 but she left the country before the orders could be enforced.

Google, Bing and Yahoo were asked by him to make his name unsearchable. They have not. Now that he is back in Vancouver Clayworth has asked local police for help. They agreed to investigate but if charges are laid and Lee is found guilty it will be difficult to arrest her because she is outside the country.

“Internet defamation, cyberstalking, cyberbullying, all of these things are unfortunately becoming more and more common,” said Allen Mendelsohn, internet law specialist. “As people have problems in the real world they tend to take those problems on line now so I deal with cases like this on a pretty regular basis.”

Canada has no specific laws for this type of situation, he said, but authorities and the courts have done a very good job of taking existing laws and applying them to internet cases. Specifically they have applied laws against criminal harassment with penalties of jail time. In civil law, victims have sued for defamation and gained monetary compensation.

“If all of the parties are within one country it’s relatively easy,” said Mendelsohn. “The problem with this particular case is that the case and the facts cross a lot of borders.”

Facebook is unlikely to act on a request to remove defamatory posts unless ordered to do so by a court in the United States where it is headquartered, said Mendelsohn. Search engines are not likely to act at all. “Google, for example, will not necessarily listen to any court orders because their principal stand has always been ‘We are not responsible for policing the internet, we don’t host the content. Go to the website operators to get the content removed. Don’t ask us to remove items from the search engine.’”

Individual countries have passed laws against cyberbullying but there are no international agreements to try to stop it when it crosses borders. Until such agreements are forged Mendelsohn suggested individuals take steps to protect themselves.

Your own computer should be protected by a password to prevent others from using it maliciously, he said, and make sure all the passwords you use across various services are good ones and different from each other.