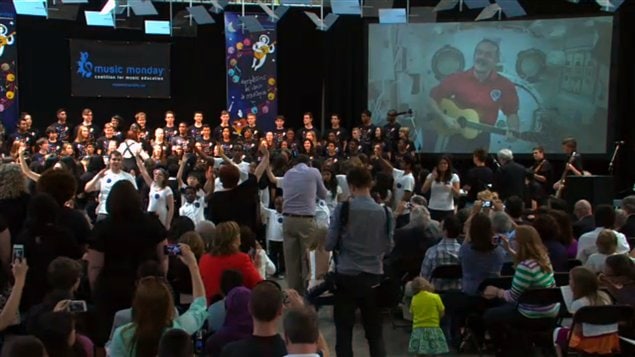 From space and across Canada, Music Monday celebration

Canadian astronaut Chris Hadfield sang and played on his guitar on the International Space Station, while across Canada students sang along in a live video link to celebrate Music Monday, May 6.

Music Monday has been celebrated since 2005. This year’s official song, I.S.S. (Is Somebody Singing), was co-written by Hadfield and Ed Robertson of the group The Barenaked Ladies.

“Many students across Canada do not have music programs in their schools due to funding cut backs and lack of resources,” said Coalition Executive Director, Holly Nimmons. “Music Monday is a tangible demonstration of how music programs unite us, shape young lives and contribute to the cultural vitality of Canada.”