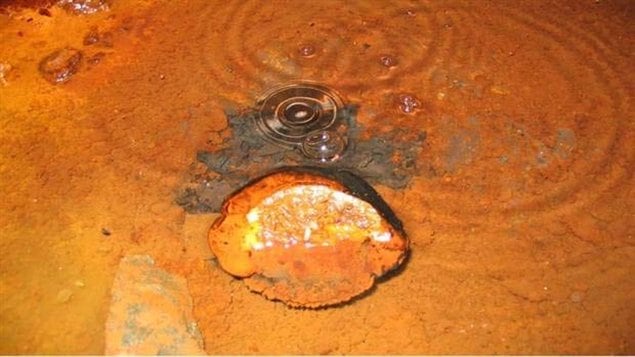 Gas that bubbles out of the water in a deep mine in Ontario has a chemical composition that can be a food source for microbes living in deep ancient fluids underground.
Photo Credit: J Telling/Handout

Scientists have recently discovered what is the oldest water in the world. They say the water is slowly leaking into a mineshaft in Timmins Ontario, almost 2 and half kilometres underground. While miners have known about the salty water leaking into mines in the area since the late 1800’s, no-one has analyzed it till now.

Dr. Barbara Sherwood Lollar, a professor of Earth Science at the University of Toronto who was part of the team that made the discovery says it is exciting on so many levels.

Among the key ingredients in the water that Dr. Holland and others measured are isotopes of noble gases, including helium, neon, argon, krypton and xenon. The gasses are produced by the radioactive decay of heavier atoms in rock but are chemically inert so their accumulation in the water can be used to measure how long the water has been sealed off

Data so far have determined the source of the water to be at least 1.5 billion years old, but a type of xenon analyzed is more enriched than that present in today’s atmosphere meaning the water must have come from the atmosphere before the water was isolated and corresponds to a time around the age of the rock itself, about 2.7 billion years ago.

The researchers have yet to find microbial life in the Canadian water which they say could take up to a year.

If such microbes are found their presence would signal the existence of a “Galapagos of the deep,” Prof. Sherwood Lollar said — isolated ecosystems that have been free to follow different evolutionary pathways independent from the rest of life on Earth. Their existence would also bolster the theory that life could be flourishing today deep below the surface of Mars or on other distant planets where conditions at the surface are inhospitable.