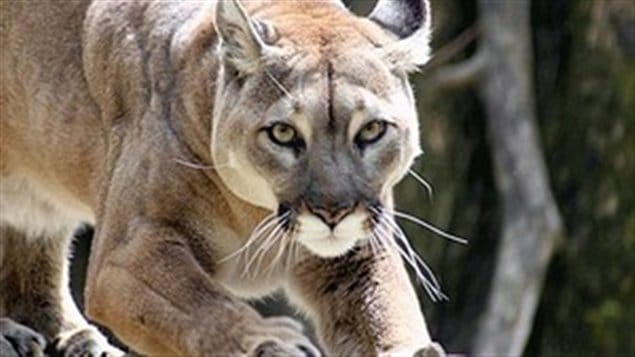 There have been three incidents of cougar attacks in western Canada this month, luckily with no serious injuries.

Cougar attacks seem to be in the news this month, earlier this month in the west coast province of British Columbia a young man managed to scare off a cougar who was attacking his dog, and narrowly missed a serious confrontation himself.

In Alberta earlier this week, near Banff, a young man walking along in the north side of town listening to headphones was knocked down by a cougar. He swung the skateboard he was carrying at the cat which scared it off. Fortunately, although shaken, he was not seriously injured.

Today in another part of the western Canadian province, near the town of Hinton, there was another encounter.   Dean Hordal and his wife were walking along a trail when they saw something streak past.   The animal knocked down and grabbed their 15kg dog which had been about 10 metres ahead of them.

Hordal says, “Everything happened very quickly. After I thought about what I done, it’s not something I would probably do again.”

What Dean Hordal did was climb part way up the tree after the cougar and grab its tail.

The cougar dropped the dog and continued up the tree. “..and I continued down,” said Hordal  ” It was probably 30 seconds to a minute it all happened,” he said. “I never seen (a cougar) in the wild before and I hope I never really do again.”

Since the incident the dog Mika, who was not badly hurt, is doing well with the only symptom being a “strangled bark”.