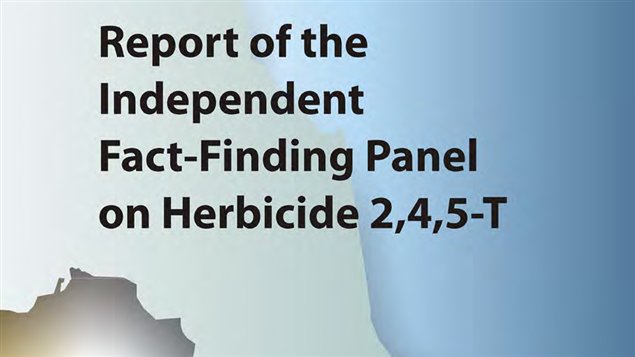 Hundreds of workers were exposed to the herbicide Agent Orange according to a panel appointed by the province of Ontario.
Photo Credit: Herbicide Panel

Hundreds of workers were exposed to unsafe levels of Agent Orange

Workers in three government agencies in the Canadian province of Ontario were exposed to unsafe levels of the herbicide 2,4,5-T, often known as “Agent Orange’, according to a report released by a panel of experts on Thursday (June 13).

Chaired by Dr. Leonard Ritter, a University of Guelph toxicology professor and expert, the five-member expert panel was handed more than 45,000 government files in some way linked to Agent Orange.

Ritter said the panel concluded that Agent Orange exposure “substantially exceeded safe levels” for Ontario Hydro, the Ministry of Natural Resources and the Ministry of Transportation workers involved in mixing, loading and applying the herbicide.

Questioned by journalists at a press conference, Ritter estimated hundreds of workers were affected by the herbicide.

The herbicide 2,4,5-T wasn’t banned by the Ontario government until 1979, and six years later by the federal government.

In a statement released after the report was presented Ontario’s Minister of Natural Resources David Orazietti, and Jim Bradley, Minister of the Environment said: ““We would like to thank Dr. Ritter and the panel for their work on this topic and their report. Our government will review the report to determine if any additional steps need to be taken to address its findings.”

The Ontario Minister of Natural Resources established the Ontario Independent Fact-Finding Panel on Herbicide 2,4,5-T to determine where, when and how 2,4,5-T herbicide was used in Ontario by government ministries and agencies, and whether exposure may have potential health impacts.

Agent Orange was used by the American military during the Vietnam War.