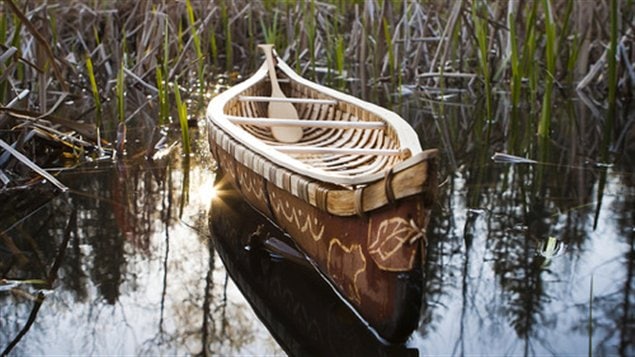 Alice Beaudoin's mother made this model canoe, to take with her this winter on her Kokum duties, (similar to Grandmother duties) talking to other Algonquin elders about unity. She calls it Mamwi, which means "together".
Photo Credit: Alice Beaudoin

Paddling for Our Waters

National Aboriginal Day has been an official celebration in Canada since 1996, but for millenia, Canada’s aboriginal communities honoured the summer solstice as an important change in the calendar that ruled their hunting and gathering practices.

On June 21st this year there will be gatherings and Pow Wow’s across the country.  And just north of Ottawa, a group of people are taking part in an event that is intended to strengthen the connections between native and non-native groups, that began when the Nishiiyuu Walkers came through the communities of Wakefield and Chelsea, Quebec in March.

Scott Duncan is one of the non-native organizers of “Paddling For Our Waters”.  He lives in Wakefield, Quebec and remembers the moving experience of welcoming and supporting the Nishiyuu Walkers in March.  These are the young native people who left their northern communities on James Bay and walked 1600 kilometres in solidarity with the Idle No More movement to protest the treatment of Canada’s aboriginal people.  Scott Duncan says he is committed to maintaining the ties with the local First Nations people because “the relationship is really damaged”.

Vanessa Stevens is a member of the Kitigan Zibi Algonquin First Nation, and one of the organizers in this community.  She says, “The Ottawa river-system has always been key to our lives as Algonquins, in fact, it was 400 years ago this month that Algonquins assisted explorer Samuel de Champlain as he traveled down the St. Lawrence and Ottawa Rivers. “

Tomorrow, following a sunrise ceremony, 25 people, dressed in red, will put their canoes in the water and paddle until a midday portage to Lake Leamy, and then continue on to Victoria Island, in the Ottawa River at the foot of Parliament Hill.

Carmel Kilkenny spoke with Vanessa Stevens about the plans for the day and the significance of the summer solstice.