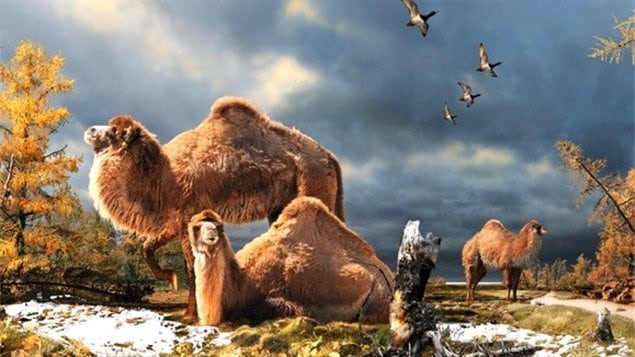 Camels roamed the Arctic millions of years ago. About a third larger than today's camels, it/s though the hump of stored fat-energy common today was developed to help them survive long cold winters.
Photo Credit: Julius T. Csotonyi illustration

Studying massive changes to geography and climate in the Arctic

ListenWe know Canada’s Arctic, at least in winter as a bitterly cold place, In summer it can still be quite chilly, as evidenced by the snowfall this week in Iqualuit in Nunavut.

The high Arctic can also be a barren place, virtually devoid of anything more than lichens, some grasses and possibly some low shrubs, but that wasn’t always the case.

It was once much warmer, forested, populated with a variety of animals from giant beavers to camels, and with a much larger land area and much less ocean.  This summer a team of scientists will once again head to the high Arctic to study the geology and try to determine how and why the landscape changed, and when and the relationship between the geography and climate. This will also help current climate modelers to understand what may happen in the future

Dr John Gosse is a Geology professor in the Earth Sciences Dept of Dalhousie University in Halifax Nova Scotia.  He is a renowned specialist in geochronology.

In the Pliocene era of 3,5 to 5 million years ago, the average temperature of the entire Earth was only about 2degrees Celsius warmer than today, but in the Arctic it was about 20 degrees warmer.

The landscape featured a fairly lush boreal forest, with things like giant camels (about 1/3 larger than those of today) and giant beavers, and so on.

It also appears that there may not have been the wide channels of sea water between the islands in the Arctic Archipelago, but rather that the “Beaufort feature” was a much larger landmass.  The team will be serarching for evidence to verify this theory, and perhaps to discover how the channels formed to create an exchange of seawater between Pacific and Atlantic

Scientists today say the added C02 we’re putting into the atmosphere is already pushing the earth towards a 1 degree increase, with 2 or even three degrees possible.

Dr Gosse says, that the research in the Arctic is extremely important and shows the major effects of even seemingly minor changes such as a 2-degree average Earth warming is greatly amplified in some areas of the earth such as the far north enabling ancient camels and horses to survive in the region.

By studying and dating the geographical and biological features in the Arctic, scientists will be able to better determine when changes in climate took place, the amount of C02 present in the atmosphere, and how these changes are related.

According to Dr. Gosse, there are still at least five more years of work before the project on the response of the Arctic landscape to climate change will reach its goals.