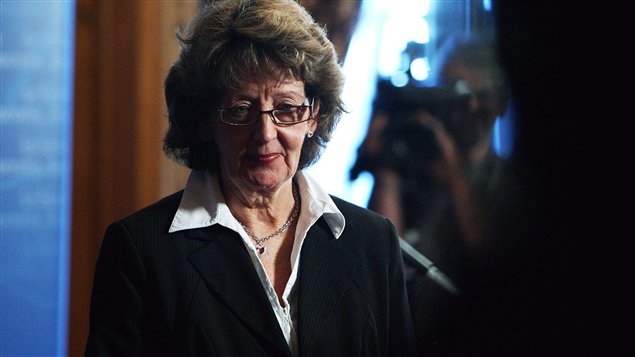 Senator Marjory LeBreton has announced she is stepping down as Government Leader in Canada's upper chamber the Senate.
Photo Credit: Sean Kilpatrick/CP

Senator Marjory LeBreton stepping down as Government Leader in Senate

After working with four Conservative Canadian Prime Ministers since 1962, Senator Marjory LeBreton has announced she is is stepping down as Government Leader in Canada’s upper chamber the Senate, after more than seven years in the position.

After almost seven and a half years, I have advised the Prime Minister of my intention to step down as Leader of the Government in the Senate.

I would like to personally thank Prime Minister Harper for giving me the opportunity of a lifetime to serve in his government and to be part of so many initiatives undertaken by our government on behalf of our fellow citizens, whether it be economic growth and stability, safer communities or courageous and principled foreign policy. Most of all, I want to thank him for his trust, his strong leadership and his friendship.

While I will be leaving the position of Government Leader in the Senate, I will continue to be an active member of the Conservative Caucus over the next few years. I intend to step up my efforts in support of meaningful Senate reform and also actively back the new strengthened rules we introduced regarding Senate expenses.

In a statement released later on Thursday, Prime Minister Stephen Harper said: “”From our first day in office through to today, Senator LeBreton has contributed her wise counsel, exceptional work ethic, and unrivalled institutional knowledge, and in so doing has made a tremendous contribution to our Government.”

Before becoming a Senator in 1993, LeBreton had worked for Canada’s Conservative party in many organizational and administrative roles. She accompanied Prime Minister John Diefenbaker on a “whistlestop” train campaign tour in 1965. She was the tour and scheduling assistant to Prime Minister Joe Clark, and Deputy Chief of Staff and Government Appointments Director in the office of Prime Minister Brian Mulroney.

After the election of Prime Minister Stephen Harper in February, 2006, she was appointed to the Cabinet as Leader of the Government in the Senate.

On Thursday, after Senator LeBreton’s announcement, there were reports that whoever will be appointed the new Leader of the Government in the Senate would no longer be a minister and a member of the federal Cabinet.