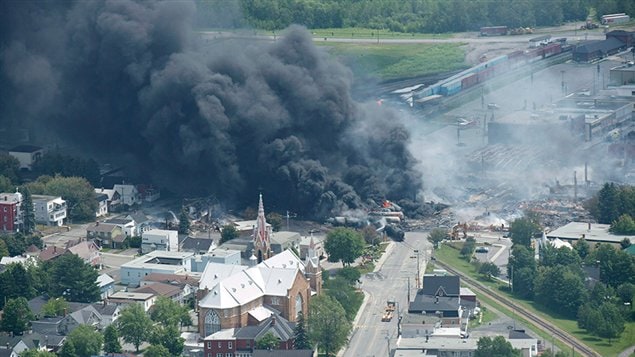 The town of Lac Megantic where derailed trains filled with crude oil exploded and burned over the first weekend of July
Photo Credit: courtesy of CBC

Disaster and Emergency Management a growing field of endeavour

The tragic and shocking events of this summer in Canada may have some Canadians giving disaster and emergency response a second thought.

The flooding in the Calgary region of the province of Alberta, the recent flash-flood of the streets and railways of Toronto, and the shocking tragedy following the runaway train in the town of Lac Megantic, Quebec,  have made a deep impression on many Canadians.

Ali Asgary is a professor of Disaster and Emergency Planning in the Department of the same name, at York University in Toronto.

He tells Carmel Kilkenny about the growth of the study of disaster and emergency management, and how it was his own experience growing up in Iran, in a region prone to severe earthquakes, that motivated him to study how to respond, what’s necessary in emergency response, and most importantly, how to be prepared.

Ali Asgary says there are many risks small communities face they are not prepared to deal with as the Lac Megantic train derailment and exploisons have proved.  But he says, as a society, we are also creating new situations that even the most developed and technologically advanced societies can’t deal with as the breakdown of the Fukushima Nuclear plant following the earthquake and subsequent tsunami in Japan has illustrated.

Ali Asgary says in Canada, in most communities, information and advice on emergency preparedness and response, is available, from what to do before a flood to how to behave during one for example, but only 30 per cent of people consult these sources.

Now he hopes to see better efforts to inform the public about these resources through both social and traditional media.  In the middle of the crisis is too late.