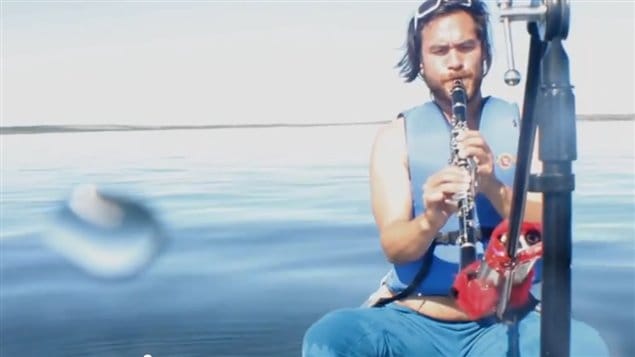 Laura Magnusson and Kaoru Ryan Klatt have already started their summer concerts for the thousands of mammals swimming in the western edge of Hudson Bay, throughout the Churchill River estuary.

“They surround our boat so regularly and follow us and look up at us… They seem very engaged quite often”, says artist and filmmaker Klatt.

Klatt and Magnusson create songs in frequencies that are somewhat similar to the sounds whales make.

“That’s often an initial way to start creating a ‘call and response’ with the whales”, Klatt says.

The pair also tries to engage with the mammals by travelling aboard a special “sculptural sea vessel”, the SSV Cetus.

“That vessel is our platform of interaction between the human species and the beluga whales.”

Klatt says he and Magnusson have been interested in whales their whole lives.

“We had a wonderful opportunity of visiting Churchill several years ago. [Our close friends who are beluga guides] introduced us to this fascinating, gregarious, social, intelligent and linguistic animal. And as soon as we met the belugas, there was no turning back. We just fell in love”, says Klatt.

The artists will house a performance series on the SSV Cetus during the summer.

Ten other musicians and interdisciplinary artists have also created works specifically for the whales.

“I think a lot of artists and musicians are very excited to expand their arts beyond human boundaries.”

Klatt says he takes the safety of the belugas “very seriously”.

“We have a philosophy of a very gentle approach, a very responsive approach… We only engage with them if they appear to be consensual and interested in what we’re doing.”

The 75-day art expedition will be the focus of a feature film Klatt is directing, Becoming Beluga.

“It’s a juxtaposition of contemporary art and style with reality and depicting events as they unfold,” he says.