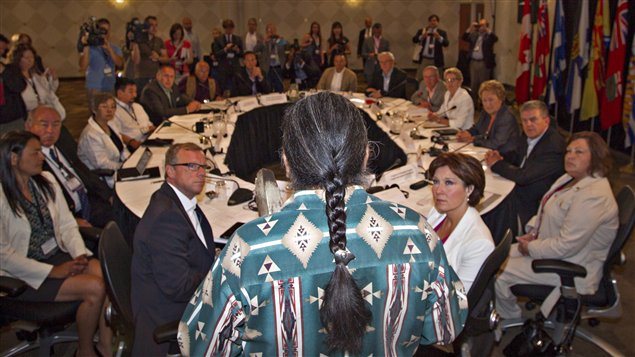 Elder Walter Cooke, centre, holds an eagle feather as he conducts the opening prayer for Premiers from across the country and National Aboriginal Organization leaders during a meeting on Wednesday, July 24, 2013.
Photo Credit: Aaron Lynett/CP

Premiers of Canada’s 10 provinces and three territories started a three-day First Ministers Conference with a focus on indigenous issues on Wednesday (July 24).

Premiers met with indigenous representatives to discuss their concerns.

Although two premiers were not present, the chair of the conference, Kathleen Wynne premier of Canada’s most populous province of Ontario said premiers at the table were in support for an investigation into hundreds of missing and murdered aboriginal women in Canada.