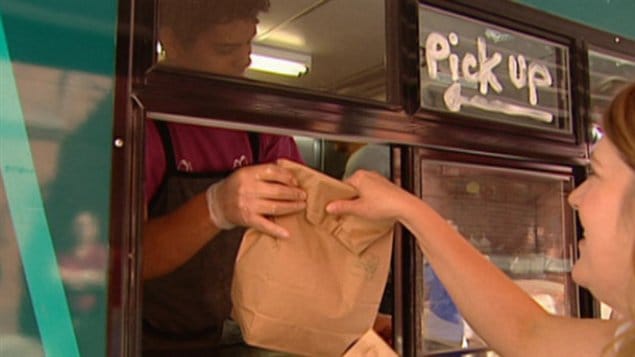 New policies in Edmonton will allow food trucks and street vendors to operate in more locations and until later hours
Photo Credit: CBC

The street dining is proving so successful, officials in Edmonton revised their policies recently, extending the hours and the places where these food suppliers can operate.

People can now buy food from vendors until 3 a.m. in all areas of the city except during events in city parks, when food can be served until either 11 p.m. or the park’s regulated closing time.

The new rules also allow 70 vendors to expand to locations beyond downtown and allow them to take advantage of events at sports and recreation centres.

Mayor Stephen Mandel is strong supporter of the expanded rules. He said, “We’re a big city, we have responsible citizens and we need to make sure that … [the] younger generation … has the kind of life they expect. And if street vendors are a part of that, the marketplace will determine whether or not they make enough money to stay open.”

The cautioned that the policies will change if problems arise.

“I think that if it works and it doesn’t cause any problems, it’s a great idea. But if it doesn’t work and it causes problems, we’ll have to stop it.”

Montreal is also experimenting with street vendors and food trucks this summer.  The city has allowed them for the first time in almost 60 years.