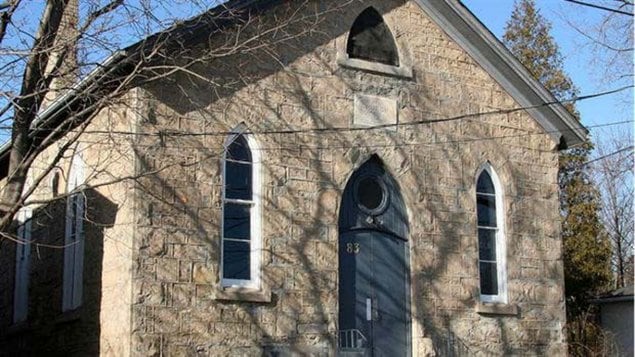 It was the symbol of a new life and freedom for fugitive African-American slaves.

The former British Methodist Episcopal Church in Guelph Ontario was built by escaped slaves who had managed to flee the US to freedom in what was then known as Upper Canada.

Slavery had been restricted in Upper Canada (now Ontario) from 1793, and other provinces in British North America (now Canada) by 1800.

It was later abolished entirely throughout the British Empire by 1834. Throughout the 1800s and peaking between 1845-65, “abolitionists” in both the US and Canada had created a network of secret routes and safe houses to ferry fugitive slaves to Canada. This became known as the “underground railroad”.

Although the former slaves were “free” in Canada, there was still segregation and  the growing community was not readily accepted by existing church congregations. So, by 1870, the former American Slaves had built their own churches. In Guelph, Ontario a frame church was replaced in 1880 by the existing limestone structure.

The “BME” church  became the spiritual, cultural, and educational, centre of the local black community.

In 2009 the local city council said it intended to declare the church a heritage site but nothing was done.

In 2011 the church was for sale and the Guelph Black Heritage Society intended to buy it.  Marva Wisdom, founder and president of the Guelph Black Heritage Society, said one of the reasons the Society was created was to save the former church from being turned into condos, and instead to have it officially declared a local heritage site.  A press release from the society indicated their mission is “to restore and maintain the historical British Methodist Episcopal church building as a community cultural and spiritual gathering space and promote Guelph and Wellington County’s distinctive place in southwestern Ontario’s rich Black heritage,”

The sale was held up by a legal dispute over ownership between a former pastor and the British Methodist Episcopal Church of Canada.  In 2012 the dispute was resolved and the Society obtained the building.

Their desire to have it declared a Guelph Heritage site also succeeded this past weekend in an official city ceremony. The Black Heritage Society is now hoping to raise $500,000 to help pay the mortgage and repair the historic building.

The group is now also seeking a provincial designation as an Ontario Trust Heritage site.