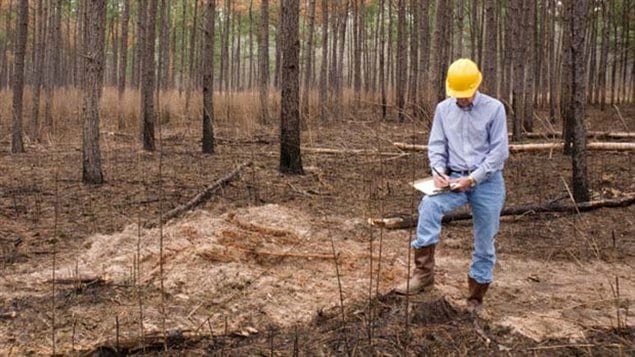 Some New Brunswick scientists say they're concerned that herbicide spraying of softwood stands is damaging the food source for local deer and moose.
Photo Credit: iSTOCK

Scientists are calling  provincial  forestry herbicide programme as “ludicrous”. He says,  “Whether it’s the Crown managing for an unnatural forest, in terms of climate change, and what’s right for this area, or by putting synthetic chemicals on to have a healthy forest — it is flawed logic.”

The  provincial government in east coast New Brunswick has been spraying herbicides on 15,000 hectares of crown land since the 1970’s  when it first permitted pulp and paper companies to clearcut natural forest and replace it with plantations. The taxpayer funded programme is to benefit the lumber industry by protecting  fast growing soft wood trees from encroaching hardwood saplings .

The hardwood saplings however are an important food supply for deer and moose, and there have been suggestions that the programme has removed thousands of tons of such food and has  contributed to the steep decline in moose and deer numbers in the province in the past ten years.

Rodney Severidge is a biologist at the University of New Brunswick, Fredericton.  He says studies show the chemicals stay in the ground for up to a year. He says, ” We are fighting nature, and it’s ludicrous”

The Conservation Council of New Brunswick has been trying to get the chemicals banned for years. Tracy Glynn, a spokesperson for the council, “When we look around at our neighbours, Quebec banned herbicide spraying of its public forests in 2001, and it’s well overdue that the government get into 21st century forest management that is ecologically and socially responsible,” she said

The council cites new evidence it says show the herbicide, previously thought to me safe for humans, is being shown to have toxic affects on animals and humans, including birth defects

Glynn says, “Old spruce and fir stands and beautiful maple and birch ridges have been clearcut, doused with herbicides and replaced with tree farms. Herbicides kill broad leaf trees, shrubs and grasses destroying the food source and habitats of many species found in our forest.”

CBC News tried to contact the provincial Department of Natural resources, but they declined an interview. A later email from the New Brunswick DNR said “The herbicide program is essential to the future of New Brunswick’s forestry industry and involves the use of federally-approved herbicides on Crown land.”

Health Canada is now reviewing over 400 pesticides that were registered before 1994 — that review is expected to be completed by next year.