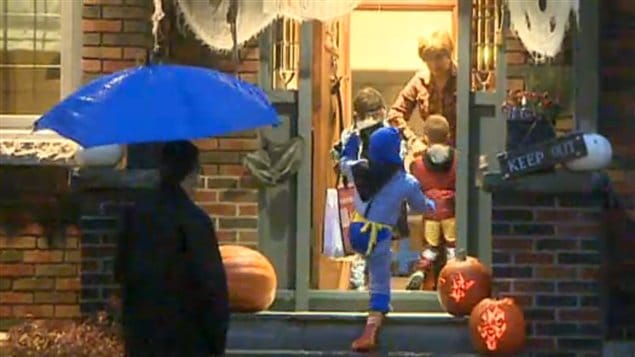 On Halloween (Oct 31) children especially enjoy dressing up in various costumes and disguises and going door to door to collect candy. Costumes have often been worn to school during the day, but some schools say because some cultures don't participate, the practice is not "inclusive" and costumes are banned.
Photo Credit: CBC

Some schools in the Niagara district of southern Ontario have said students should not dress up in typical Hallowe’en costumes.

“I think society has become just too sanitized. We’re always worried about what someone else is going to think.” (Tracey Turavani-parent)

Traditionally, children dress up to varying degrees in costumes, some funny, some scary, but all in good fun on the 31st of October. This Thursday, across Canada in most schools children will dress up as their favourite superhero, or as princesses, zombies, Dracula ( a perennial hit) and so on.

In the evening the younger children in their costumes go door to door in neighbourhoods calling out “trick or treat” at each door, and usually getting a treat, consisting of a variety of candy.

However, the Niagara school board says some families don’t participate in Hallowe’en, or can’t afford costumes, and are excluded. The board however has left individual schools to decide whether to allow costumes or not. In a few cases schools have instituted what they’re calling “spirit day” and are encouraging children to wear orange and black clothing (typical Hallowe’en colours). The school officials say children will participated in Halloween themed events, but without costumes.

One parent,Tracey Turavani, speaking to reporters from her home in Port Colborne said, “Kids should be allowed to wear their costumes, period, and in any grade. It’s one day, it’s meant to be a fun time.” She added, “I think society has become just too sanitized. We’re always worried about what someone else is going to think.”

In online comments, reaction to the no costumes decision has been almost universally negative, ranging from “ I thought we nixed all this politically correct stuff”, to much stronger comments about school officials and the anti-Halloween decision.

The North American version of Hallowe’en, now evolved into a supposedly a scary time when ghosts roam freely, grew out of a mixture of a Christian remembrance of the dead, “All hallows eve”, in which hallows- ie saints- martyrs, and faithful Christion dead, and Celtic feast traditions to celebrate harvest.