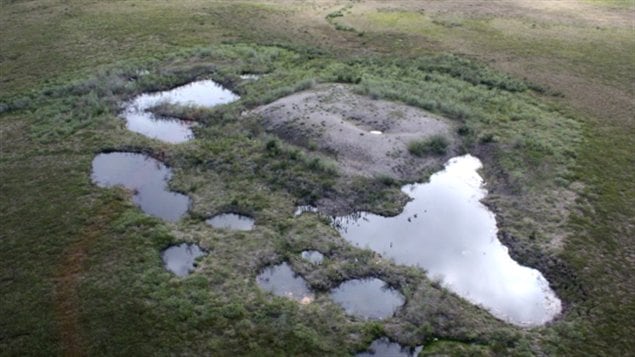 Leaching is coming from waste piles called sumps, which were frozen into the permafrost during oil and gas exploration work.
Photo Credit: Queen's University

They are called “sumps”. They are basically huge pits dug into the permafrost near the sites of exploratory oil and mineral drilling sites. They were then filled with wastes such as drilling mud, rock cuttings and drilling fluids, which commonly contain detergents and highly concentrated salt solutions, The dumped material-each sump contains thousands of cubid metres of material,  was then capped with clean material and left to freeze in the permafrost.  It was thought that it wold remain thusly frozen and stable, forever..

However a new study says the situation is changing, and the sumps have started leaching out waste materials. The study has been published in the online scientific journal “PLOS One”

In the Mackenzie Delta there are some 150 such sites dating back as far as the 1960’s. The ground in the Mackenzie is now about 2 degrees warmer than historical averages.

Steve Kokelj, a scientist behind the study published Thursday through Queen’s University, says they have studied the biology and sediments of 100 lakes in the region, 20 of which were near sumps.

He says at least four were found to have elevated levels of salts, particularly chloride, a common element in drilling waste.

The levels were high enough to change the micro-organisms that live in the lakes and anchor the food chain.

Co-author of the study, Joshua Thienpont, former Queen’s PhD student, now of Brock University says,  “It’s just another impact, one of the continually growing cumulative impacts, to these fairly sensitive freshwater ecosystems we have,”

Drilling is increasing in the north, especially following a discovery of shale oil near Norman Wells. This area is similar to the permafrost in the delta.

Sumps are still the recommended method of drilling waste disposal in the Arctic according to federal guidelines and the Northwest Territories government says energy companies have committed to spend some $637 million for exploration.

N.W.T government records show that between January 2009 and June 2011, seven more sumps were created for drilling waste, while seven other wells had their waste trucked outside the territory for disposal.

Lake sediments leave a history of our environmental victories and sins,” says Queen’s professor John Smol. “The sumps were supposed to be permanently frozen but their thawing is a yet another warning sign that there are consequences to industrial activities. Permafrost sumps such as these are not the way to get rid of waste.”