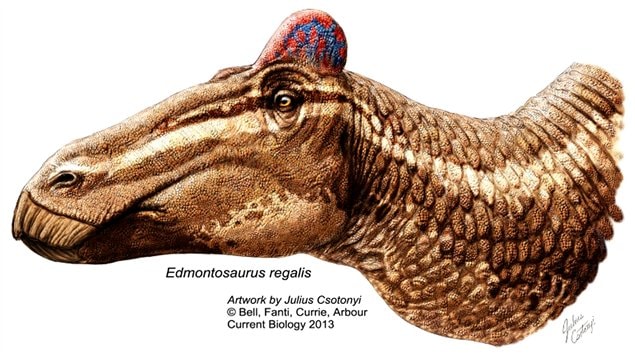 Previously unheard of, an Alberta fossil shows fleshy (red) crest on Edmontosaurus, similar to a cockcomb on a rooster.
Photo Credit: Julius Csotonyi

There have been many duck billed dinosaur fossils, but now an international team has made a previously unheard of discovery.

Working with paleontologists and scientists at the University of Alberta, this fossil is what is known as a “natural cast” of a the dinosaur, almost mummified, with skin impressions and for the first time, clear indication of a fleshy head crest, similar perhaps to a cockscomb on a modern rooster.

The Edmontosaurus Regalis is a type of hadrosaur, a plant-eater that lived about 72 million years ago and could grow up to 12 metres long.

It was found near Grande Prairie, in west central Alberta in western Canada.

Until this find, paleontologist had sometimes wondered about a head crest, but as any fleshy parts usually are long decayed and disappeared before fossilization, this had been speculation with no evidence, and it was generally thought that these dinosaurs had plain heads with no adornments, horns’ or spikes.

The skin impressions were found by University of Alberta alumnus Phil Bell, now a paleontologist working in Australia.

Victoria Arbour, a PhD candidate in the Faculty of Science who is working under the supervision of renowned U of A paleontologist Philip Currie, helped with analyzing CT scans of the fossil.

“It really highlights how many surprises there can be in the fossil record when we get soft tissues preserved,” says Victoria Arbour. “Usually we only get the hard parts, like skeletons or shells, but animals can look really different on the outside as opposed to the skeleton.”

Based on chemical composition, it was thought the structure was red in colour.

Phil Bell said this is like “finding for the first time that elephants had trunks”   He says there are a lot of Edmontosaurus skulls with no previous evidence of fleshy adornments, With this find it leads to other speculation. “There’s no reason that other strange fleshy structures might have been present on other dinosaurs, including T-rex” he says.

While bony head structures are thought to have been used for sound production, the fleshy structure on this Edmontosaurus Regalis about 20cm high by a little over 30cm long is though more likely to be used for display and recognition, and possibly to show status and for mating in the herd.

Phil Bell adds that this discovery will “dramatically alter our perception of the appearance and behaviour of this well-known dinosaur and allow us to comment on the evolution of head crests in this group”.