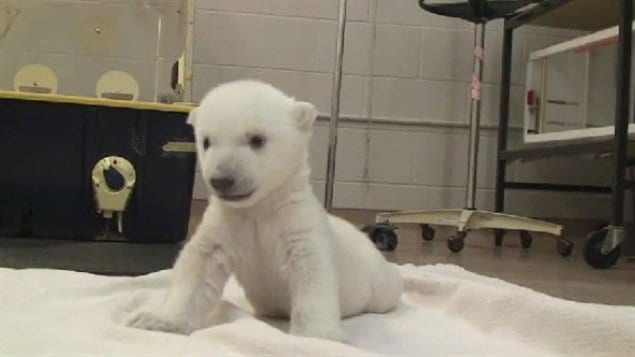 As yet un-named the male cub has only recently opened his eyes and is just taking his first steps
Photo Credit: Toronto Zoo

Whatever one’s opinion is of zoo’s and  keeping of wild animals, this video of the Toronto Zoo’s young polar bear cub is absolutely adorable.

The cub was born in a litter of three in November to Aurora, one of the zoo’s two female polar bears. Unfortunately, in spite of their mother’s nursing, his brothers did not survive the first 48 hours.

Zoo staff then removed this third cub when they noticed he was getting weaker and took him to their intensive care unit. They are cautiously optimistic about this little guy’s chances though as he seems to be getting stronger and growing well.

The as yet un-named cub is being watched by a team of 20 caring for him around the clock.

Not a great deal is known about the early days of polar bear cubs as they are usually hidden away in the den with their mother for some four months.

Zoo officials have been trying for years to breed 13-year-old Aurora with 10-year-old make Inukshuk. In a previous attempt two years ago, the mother rejected the cubs, killing two, one was taken away and raised by hand. Hudson is now in a zoo in Winnipeg.

Another attempt last year resulted in the deaths of all three cubs.

Aurora and sister Nikita were found orphaned in Quebec at four months. Officials say she probably had no time to learn much from her own mother thus making her own transition to motherhood difficult.