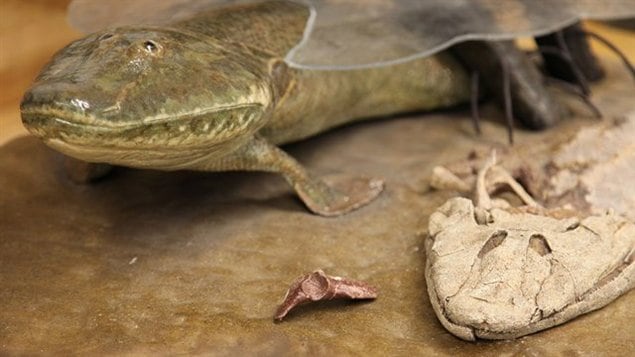 The fossil and a recreation of 375 million year old Tiktaalik, an important evolutionary link in the transition from marine to land creatures.
Photo Credit: handout-Drexel University

An ancient fish fossil going back 375 million years is revealing more information about the evolution and transition of some marine mammals to land.

US scientists discovered the fossil of what would have been a 3 metre fish on Canada’s Ellesmere Island in 2004.

The creature known as Tiktaalik roseae, looked somewhat like a cross between fish and alligator with broad flat head and teeth.

It resembles also current species the alligator gar, and the crocodilefish.

Team leader Neil Shubin at the University of Chicago said that study of the hind “fins” and joints demonstrated a key link in the evolution of fish to land creatures. I

Previously, studies involved the forelimbs. This latest study examines the pelvic girdle of the fish which is larger and more developed than previously thought. It has a prominent ball and socket hip joint which would have been attached to a mobile femur.

Thus, instead of merely dragging itself through very shallow water, in a “front wheel drive” type of pectoral motion, stronger hind limbs suggests the move to “4 x 4” locomotion began in the water and not on land and adds an important link between the earlier relatives of tetrapods (4-legged creatures) with strongly developed pelvis region, and predecessors with small and weak pelvic bone structure.

Co-author Edward Daeschler of Drexel University in Philadelpia  says, “It’s clear that the emphasis on hind appendages and pelvic-propelled locomotion is a trend that began in fish, and was later exaggerated during the origin of tetrapods (four legged creatures),”

The site on Ellesmere Island is increasingly known as a treasure trove of Devonian period fossils, the so-called “age of fishes”.  Scientists have since discovered two other ancient predatory fishes at the site.

In a somewhat related find, last year a 40 million year old fossil of a walking whale was found in the Ocucaje desert in Peru. In that case it was a bit of a reverse role as this was a land mammal that was reverting back to a marine mammal.