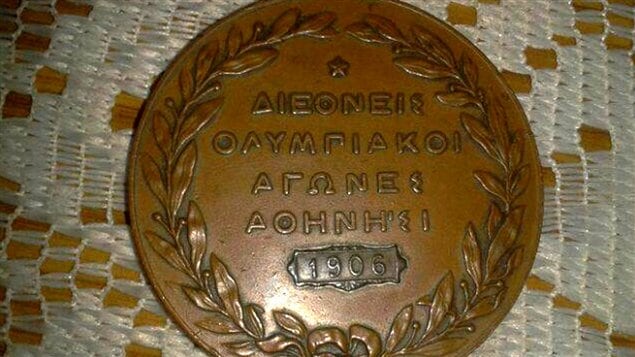 The rare participation medal from the first Olympic games of 1896 in Athens, this was left over and re-stamped for the 1906- intercalated games- in Athens
Photo Credit: courtesy vicky Fitzgerald

For almost six decades, Nova Scotia resident Vicky Fitzgerald kept a large but mysterious medal hoping some day to figure out what it was.

As a child, her family was not well off, and a great-aunt relative in the US would sometimes send them clothes.

One day, while going through the pockets of the clothes she found what looked like a large coin. Her parents phoned the relative in Massachusetts  who sent the clothes but she said she didn’t know anything about it and they could keep it.

For years the coin remained a mystery, although the suspected it had something do to with the Olypics due to the second word in Greek on reverse side,

Many years later she did some online searching and discovered it was a rare participation medal from the first 1896 Olympic games in Athens, but that was left over and re-stamped for the 1906 games.

These were called the “Intercalated Games” an idea which was eventually abandoned to have international games in Greece in the two year interval between the Olympic Games. it was a kind of compromise between the IOC and Greek officials who said they could host the games in perpetuity.

The IOC now does not even recognize the 1906 games, which nonetheless set the format for the Olympics with an opening ceremony, parade of nations, and closing ceremony. They also had a compressed schedule and the concept of an athletes village,  unlike the long drawn-out affairs of the 1900, 1904 and 1908 games.  The 1900 Paris Olympics for example began in May and ended in October, and indeed were rarely referred to as the “Olympics”. The 1904 St Louis Olympics lasted from July to November while the 1908 London games lasted a full 6 months.

A TV reporter who heard about the medal put Fitzgerald in touch with the US Olympic Committee archivist who verified the medal.   The archivist said they had five but the sixth was missing.  There may in fact only be six left in existence.

The US Olympic committee has since contacted Fitzgerald  and asked her to donate the medal to them.

“I would like to donate it, but I have to discuss it with my family. I always said my children would get it, or maybe my grandchildren,” she said