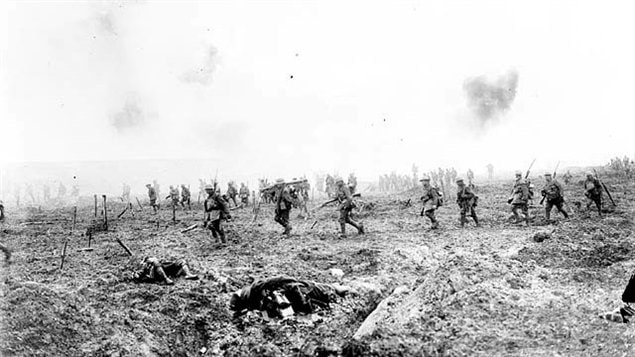 April 1917: Canadian bravery, blood, victory and the sense of nationhood

On this day, April 9, 1917, during the First World War, tens of thousands of Canadian soldiers lay shivering in the damp chill of trenches, dugouts, or waiting in deep underground caves.

They knew that just before dawn all hell would break loose.

In late 1916, after two years of grinding war which saw little change in positions of the Germans or the Allies, a major Allied offensive was planned for the Arras region of France.

The almost impossible task of taking a high ground known as Vimy Ridge was given to the Canadians. The British, and French had tried several times, and been slaughtered, with some 150,000 lives lost. This high ground had originally been captured by the Germans early in the war, and because of it’s strategic position they had strongly re-inforced and built up massive defences on the ridge ever since.

Canadian leaders had been agitating for some time to unify the Canadian divisions which had previously been spread out among the British army.

The Canadians would now fight for the first time in the war as a unified force, and under Canadian command.

Lt Claude Williams was a 21 –year old medical student from Hamilton in southern  Ontario.  As he waited in the darkness, of that chill morning he wrote to his parents.

Canadian General Arthur Currie knew the attack uphill against well-fortified positions would be costly, and he wanted to save as many lives as he could.  To this point in the war, the British and French generals had simply thrown men against an objective giving them no real idea of what or why they were doing other than to advance into fire.

Currie saw this as a failing. He created elaborate training programmes recreating the objective and had his men practice. Planning was meticulous, rehearsed and timed. He had the chain of command inform the men of what their particular role was in the overall plan, something unique at the time, to give them a sense of purpose and understanding of how they were important in the battle.

Later, Lt Williams wrote  “The attack was at daybreak, we had to lie in the open trenches all the night: the morning turned out grey, cold and drizzling, everybody shivering and chilled to the bone. At the arranged time, to the absolute second, suddenly, as dawn was breaking, every gun on the whole front opened up. The roar of the heavy guns was deafening,”

H-hour was 05:30, with almost 1000 artillery firing into and in front of German lines. The Canadians arose from their trenches and began the “Vimy glide” advancing 100 yds every three minutes behind the similarly advancing artillery shells falling several hundred yards ahead.  This “creeping barrage” was another new Canadian tactic designed to keep the enemy in their trenches away from their guns, until the Canadians were upon them.

Still enemy fire was intense. But there was to be no stopping, the momentum could not be lost

“At one place, we heard a Canadian who was lying deep in a shell hole calling out, ‘Water, water!’” Williams wrote. “The top of his head had been blown off, exposing his brain. We could do nothing. Orders were that we were not to stop to attend the wounded. They must wait for the stretcher bearer.”

At the end of the day, the Canadians had taken much of the ridge, and by April 12 , all of the ridge having made greater advances, and captured more arms, and more prisoners (4,000) than any other Allied offensive since the start of the war.

Because Canadians had fought for the first time as a unified force and under Canadian command, the victory at Vimy Ridge is often cited as the battle in which Canada became recognized both internally and externally as a distinct nation.

The British and French generals were also said to have learned from the meticulous planning and preparation by the Canadians, and changed their own tactics somewhat.

From this point on in the war, Germany was on the defensive.

In August, Canadians won another almost impossible victory on Hill 70.  Later in 1918, the last months of the war became known as Canada’s 100 Days, as Canadians, whose reputation for valour and determination was clearly recognized, were used as shock troops winning every battle they were sent into in.

Four Victoria Crosses (VC) were awarded for bravery. Of these, three were earned on the opening day of the battle:

Captain Thain MacDowell of the 38th Battalion. MacDowell had also earned the Distinguished Service Order on the Somme. Of the four Vimy VCs, only Captain MacDowell survived the War.

“For most conspicuous bravery and indomitable resolution in face of heavy machine gun and shell fire. By his initiative and courage, this officer, with the assistance of two runners, was enabled, in the face of great difficulties, to capture two machine guns, besides two officers and seventy-five men. Although wounded in the hand, he continued for five days, to hold the position gained, in spite of heavy shell fire, until eventually relieved by his Battalion. By his bravery and prompt action he undoubtedly succeeded in rounding up a very strong enemy machine, post”