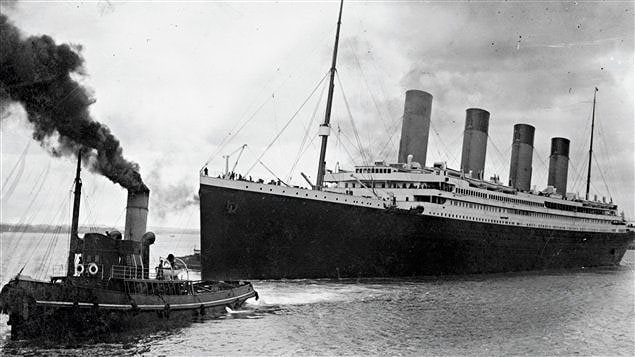 It was late at night on the 14th of April for the wireless operators in a lonely Marconi radio station at Cape Race Newfoundland, who had be hearing and relaying messages from incoming ships, to stations along the east coast of Canada and the US.

The Titanic (R) has been moved out of the drydock to make way for Olympic which requires repairs. This results in a faterful dealy of Titanic’s maiden voyage, from March to April. (Harland & Wolff) CLICK to ENLARGE)

Head operator Walter Gray, and two others, could barely believe the signal. The Titanic, four days out from England, was in trouble.

As trans-Atlantic ships came into wireless range of North America, they began sending signals from the passengers to friends and relatives expecting their imminent arrival. The Marconi station, the farthest land base into the Atlantic, was often the first to receive these messages.

After hours of endless greetings and messages of goodwill sent back and forth, the RMS Titanic, surely the greatest ship afloat, and on her maiden voyage, was sending a distress signal.

Although other ships had warned of icebergs on the evening of April 14, the messages received by the busy wireless room on the Titanic never made it to the bridge, although the crew was aware of the possibility of icebergs

Bow of the Titanic kilmoeters below the surface. Scientist say bacterial action is eating away at the iron and the ship will collapse within a couple of decades, eventually becoming mere rust on the ocean floor (Emory Kristoff) CLIKC to ENLARGE

At 11.40 pm, a lookout spots an iceberg dead ahead, Although the ship engines were  immediately reversed and the ship tried to turn, it scrapes the berg a mere 37 seconds later

The ship was then stopped about 600 km southeast of Newfoundland, and was taking on water. At first, the distress message was not considered too seriously, as the ship was considered unsinkable.

Shortly after midnight in the early hours of April 15th, it was obvious however the situation had become dire.

The ship’s wireless operators continued to send both CQD –the Marconi distress call, and the new SOS distress call, saying the ship was sinking and for other ships to come immediately to her aid.

Cape Race continues to relay signals back and forth to head office in Montreal and New York, to the ship owners, the sticken ship itself, and other ships in the area.

Still much of the radio traffic seems confused, could the Titanic really be in that much distress? Nevertheless, Carpathia hears the urgency and heads immediately toward the location.

The radio operator on Californian nearby, was off shift and did not hear the distress, but the ship is close enought to see Titanic’s distress rockets, but ignors them as mistakes- the Titanic could not be in distress

At 0215 the sinking ship breaks in half, and within a matter of minutes, the ship is gone.

The Carpathia arrives in response to the distress signal at about 0410 and picks up some 700 survivors,

In the following days, several ships set out from Halifax and St John’s to recover bodies, many of which were later buried and remain in Canada..

The shock was world-wide; here was a ship considered to be unsinkable, that went down so quickly and with some 1,500 lives lost. As some have said in terms of the coverage, it was the 9/11 of its day.

A later investigation into the tragedy resulted in several changes to ship rules to improve safety, not the least of which was to ensure passenger liners had enough lifeboats for the number of passengers carried.

Studying the decay of the Titanic wreck, it’s estimated that bacterial action is resulting in the ship losing 1/10 of a ton of metal every day, and that eventually it will collapse, and slowly become a mere pile of rust on the ocean floor.

Many have forgotten that Titanic had two sister ships.

The Olympic was actually the first of the “Olympic” class that included Titanic and Britannic.

Olympic was involved in a collision that required repair in dock which delayed the launch of Titanic.  A later loss of a propeller further delayed work on Titanic which pushed her maiden voyage from March 12, to April 10.  Perhaps if those incidents had not occurred, Titanic might have missed the rendezvous with disaster?

Olympic, was involved in a handful of collisions during her career, and as post-war competition was increasing, she was becoming unprofitable and was scrapped in 1934

Britannic was also to join the trans-Atlantic route, but was launched just before the First World War and instead of the RMS Britannic designation, became HMHS Britannic serving as a hospital ship. She struck a mine in November 1916  off the Greek island of Kea and sank in 55 minutes.

In spite of the world’s fascination with this tragic event, it is far from the worst maritime loss

–      Apr 1945-MV Goya-torpedoed by Soviets in Baltic sea, documented 6,100 aboard, many women and children. estimated many more undocumented.  Sank in just seven minutes Only 183 survivors