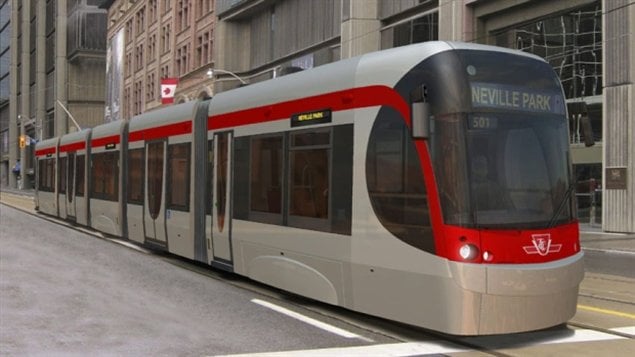 The newstreetcars, shown in an artist's rendering, will roll out at the end of August.
Photo Credit: Bombardier Transportation/Canadian Press

Toronto’s new streetcars have many exciting cool features, but plenty of leg room for passengers isn’t one of them.

The “Red Rockets”, as they are sometimes called, will only start to roll out at the end of August, but on Wednesday, the Toronto Transit Commission (TTC) invited some citizens for a test ride.

In spite of the many upgrades, which include monitor cameras instead of mirrors, LED signs, air conditioning, and automatic ramps for those with strollers, wheelchairs and bikes, some riders were not satisfied. They complained that their legs had to overlap in some seats just to fit.

Other passengers are concerned about the new doors, which slide open instead of folding out and are no longer visible to motorists along the sides of the cars.

“It’s been getting worse over the last 10 years. A lot of motorists are simply ignoring the streetcar stops, never mind the new cars,” transportation expert Steve Munro told the CBC.

The new streetcars are 30-per-cent longer than the existing double-length models and can accommodate two-and-a-half times more people. Some users worry this may cause congestion.

“It’s going to be really important for the TTC to ensure that they don’t get a backup of three of four of these streetcars, these longer ones, all in a row and then a long wait between cars arriving,” said one rider.

The new “Rockets” were built by Bombardier LRV and will replace the current fleet of 248 streetcars purchased in the 1970s and 1980s.