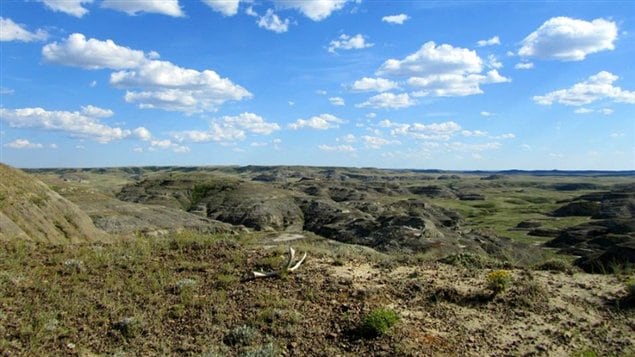 Image of the rugged "badlands" area of Grasslands National Park. Wind and rain erosion of the hills and cliffs often reveals many fossil treasures. However, 66 million years ago, it would have been lush forest, warmer and wetter.
Photo Credit: coutresy H Larsson, McGill-Redpath

A team of researchers has uncovered traces of a forest fire 66 million years ago, and along with it the forest plants before and after the fire.

The research team from was guided by Hans Larsson, associate professor at the Redpath Museum at McGill University in Montreal and Canada Research Chair in Macroevolution.

The research team of McGill students Emily Bamforth, and Christine Button, along with others from the Royal Saskatchewan museum was working in a region in the southern edge of the prairie province in Grasslands National Park.

Their research paper entitled “Paleoclimate estimates and fire ecology immediately prior to the end-Cretaceous mass extinction in the Frenchman Formation (66 Ma), Saskatchewan, Canada”  was published in the May issue of the online journal; Palaeogeography, Palaeoclimatology, Palaeoecology.

They discovered plant fossils dating from both before and after an ancient forest fire which swept through the semi-tropical forest that existed there some 66 million years ago.

It’s the first fossil record of a forest ecology and regrowth in the Cretaceous period shortly before the mass extinction of the dinosaurs.

Research team members working and ancient river channel deposit in Grasslands National Park located only about 5 metres below the end Cretaceous mass extinction horizon; one of the sites where the plant leaves were found. (courtesy Larsson- Mcgill-Redpath) CLICK to enlarge

Their findings indicate that forest recovery following a fire, hasn’t changed very much in all those millions of years.

The fossil show fast growing plants like willow, alder and birch moving in quickly after a fire, followed later by the larger trees like Sequoia.

“The abundant plant fossils also allowed us for the first time to estimate climate conditions for the closing period of the dinosaurs in southwestern Canada”, he says.

” It also provides one more clue to reveal what the ecology was like just before they went extinct”, noted professor Larsson

He says the climate would have been several degrees warmer, and much wetter than today, adding it would be similar to today’s conditions in the southern US state of Louisiana.

Professor Larsson also notes that the importance of understanding plant diversity before and after a fire, to understand animal biodiversity.