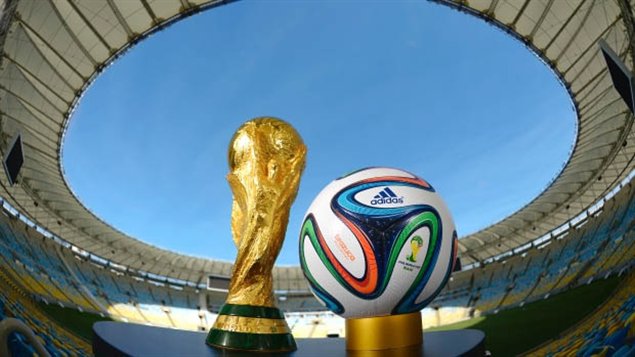 A general view of Brazuca and the FIFA World Cup Trophy at the Maracana before the adidas Brazuca launch at Parque Lage in Rio de Janeiro, Brazil. Brazuca is the Official Match Ball for the FIFA World Cup 2014 Brazil. “Brazuca refers to anyone Brazilian living abroad, but for Brazilians in the country it can also mean anything relating to national pride or being “Brazilianish” The ball is decorated with a ribbon design in shades of blue, gold and green, which Adidas said symbolizes the tradi
Photo Credit: Alexandre Loureiro-Getty Image-CBC

This year’s World Cup has introduced a number of high-tech features to the championship.

This year the ball is more hi-tech than ever. Typically a normal soccer ball “knuckles” starts to fly erratically at about 30km/h meaning it starts to wobble and travel an unpredictable path.

In 2006 the World cup ball was knuckling at 50km/h which is more typical speed at the World cup level in 2010, the “jubilani” ball also received attention when players called it supernatural and unpredictable.

This year the Addidas  “Brazuca” ball (the 12th official ball that Addidas has designed since 1970) has six panels instead of the Jubilani’s eight, therefore with longer seams and also increase seam depth changing the flight characteristics and knuckling only at higher speeds.

There is also dimpling of the ball performing a similar action as the dimpling on a golf-ball.

The dimples and deeper seams gives the player more friction against the boot to put spin on the ball as well.

Many players will by sporting Nike’s new “Mercurial Superfly” boot which has a specific 3-ply weave designed to put less material between the foot and the ball for greater “feel” of the ball by the player. The outsole is full-length carbon fibre and it has a partial sock in it.

The outsole is full-length carbon fibre and it has a partial sock in it. Also in the lineup are Nike Magista, and “Battlepack cutaway”,  Puma’s “Trick” series and others.

As for the mismatched colours, it seems that’s more of a fashion trend.

Not new in football matches, the spray is designed to keep players from encroaching on the kicker during a free kick. The defenders must remain behind the line sprayed by the referee. It remains visible for only about a minute before disappearing.  What is new is it’s use in the World Cup for the first time in Brazil

Also not new, but loudly called for is goal line technology designed to detect clearly when a ball has crossed the line. The new technology has already been used in a close call in the early matches of this World Cup