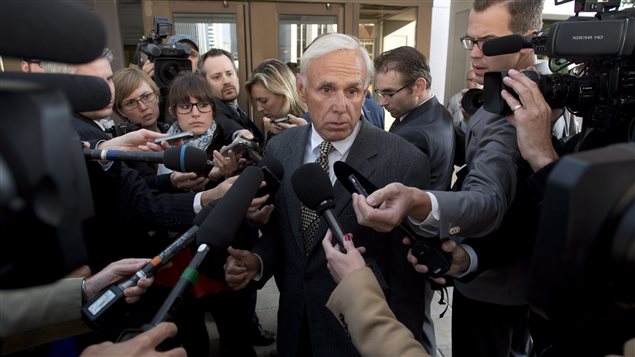 Lawyer Donald Bayne talks to journalists outside of Ottawa courthouse about the trial of his client Senator Mike Duffy on criminal fraud, breach of trust and bribery charges.
Photo Credit: Adrian Wyld/CP

The lawyer representing a Canadian Senator charged with criminal fraud, breach of trust and bribery charges says he hopes to get an early trial for Senator Mike Duffy. Donald Bayne says his client might waive a preliminary hearing in order to expedite a trial.

Bayne said Senator Duffy’s health, which he said “is a factor in all this” explains why his client wants to get on with the trial. The Senator has had two open heart surgeries.

The charges against the senator involve a $90,000 personal cheque last year from Nigel Wright, the then Chief of Staff of Prime Minister Stephen Harper, to cover disputed travel expenses made by the Senator.

The controversy over the payment has been repeatedly raised in the House of Commons.

A federal election is scheduled next year in October, 2015.