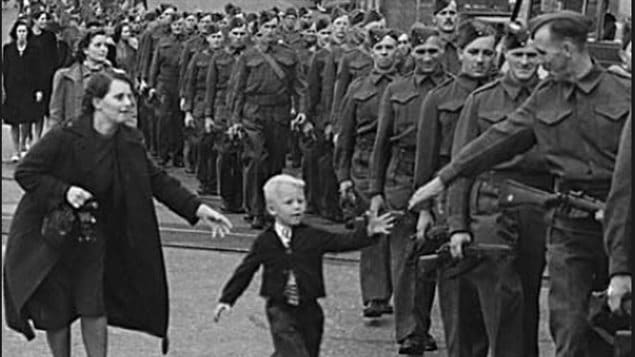 On October 1, 1940, the BC Regiment (Duke of Connaught's Own Rifles) warched down 8th street in New Wesminster British Columbia as they headed off to training camp and later to the war in Europe. This photo, printed in newspapers across North America became one of the most famous of the war years.
Photo Credit: Claude Dettloff

On the eve of Canada sending jets and military personnel to join a coalition against ISIS terrorists, two memorial events took place this weekend

On the west coast,   the unveiling of a monument replicating one of the most iconic Canadian photos of the Second World War took place this Saturday on the anniversary of the original photo

It’s called, “Wait for me Daddy” and in one image captures the emotions of separation of family, and the uncertainty of what lay ahead in the war.

The photo, by Jack Detloff for the Vancouver Daily Province newspaper ended up being reprinted in almost every paper in North America and in an October issue of Life Magazine. Pte Detloff survived the war and lived to see his young son become mayor of the city of Tofino, British Columbia.

The monument in bronze was unveiled this weekend at the same corner in New Westminster where the original photo was taken.

Over on Canada’s east coast, an event was held to commemorate the First World War.  It was to mark the “March of the first 500”  of 100 years ago when the first volunteers in Newfoundland made their was to the St John’s docks to board a steamship to England and the war.

Newfoundland at the time was a colony of Britain and when Britain declared war on Germany, many rushed to volunteer for what they presumed would be mostly a great adventure and “over by Christmas”

It was not to be,in a single battle on July 1st 1916, at Beaumont Hamel, 780 of the Regiment went “over the top” only to be cut to pieces by machine guns and shrapnel. Only 68 of what later became the “Royal Newfoundland Regiment could answer the roll then next day.

The Newfoundland and Labrador government is sponsoring several events this year to mark the centennial of the start of the First World War, as is the Canadian federal government.