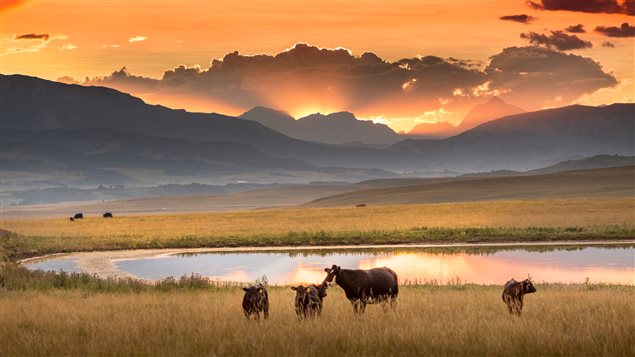 The conservation easement of Waldron Ranch aims to protect a beautiful and natural landscape for “centuries to come.”
Photo Credit: Kyle Marquardt

The Nature Conservancy of Canada has finalized the largest conservation easement in the country. It has made deal with 72 ranchers who own a huge parcel of land in western Canada whereby they can continue to use it to graze their livestock and, at the same time, it is protected from development.

Home to species at risk

The Waldron Ranch project includes 30,535 acres of land on the eastern slopes of the Rocky Mountains in the province of Alberta. It is home to several species at risk including golden eagles, ferruginous hawks and limber pine.

It contains native fescue grassland, which is the original type of grass that sustained massive herds of bison before they were hunted to near-extinction. The grass is unique in that it maintains its nutritional value into the winter.

Its spectacular scenery is easily viewed from the “Cowboy Trail”—Highway 22 that runs right through the property. Although no tourist facility will be built on the land, the ranch has a policy of allowing people to visit.

The easement cost $37.5 million paid for in part by the governments of Canada and Alberta, as well as the Calgary Foundation and several other donors.

“Because this is the largest conservation easement ever done in Canada this is truly ground-breaking, not only that this large ranch gave such a big donation in putting their land in easement, but it keeps this particular landscape in its natural form for all of Albertans and all of Canadians to enjoy and reap the benefits over centuries to come,” said Mike Gibeau, conservation co-ordinator of the Nature Conservancy of Canada. He hopes it can serve as an example to other land owners as the conservancy continues its efforts to protect lands through this kind of agreement.