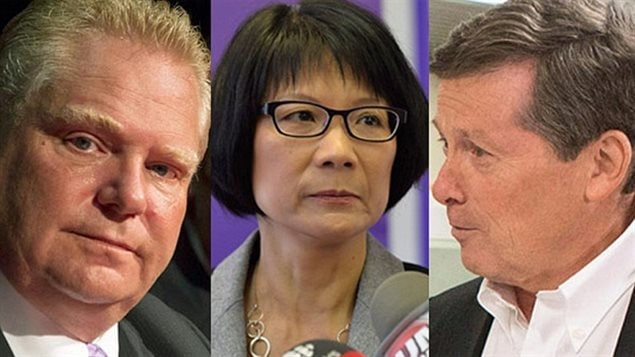 Residents of Toronto are going to the polls today to elect a new mayor, and council members representing 44 wards in the city.

Outgoing mayor Rob Ford, who was seen acting in a strange and sometimes belligerent fashion in more than one secretly taped video, had faced a number of allegations including that of using crack cocaine before admitting use during his time in office.  He has since been diagnosed with cancer and has not campaigned for re-election as mayor, but is standing as councillor for Ward 2 in the city, a position held by his brother Doug.

Doug Ford, far less controversial than his brother, is now one of the three leading candidates to replace his brother as mayor.

Also one of the three front runners is Olivia Chow who has spent the last eight years as a federal Member of Parliament, and wife of the late federal New Democratic Party leader Jack Layton.

John Tory is the other leading candidate and once led the Ontario provincial  Progressive Conservative party,  although he has not held a position at  Toronto city hall, coming a close second for the mayor’s job in 2003.

Toronto has been listed as the world’s most diverse city, and  when asked about refugees and immigrants, Chow responded, mental health services are the most pressing need for immigrants who face challenges in a new environment, Tory said, employment and making sure new immigrants to Canada could speak English or French before they arrive. Doug Ford said he supports creating more child care spots especially for single mothers.

Polling for the mayor’s position, and those of councilor in 44 wards in the city will close at 8pm (20;00h)