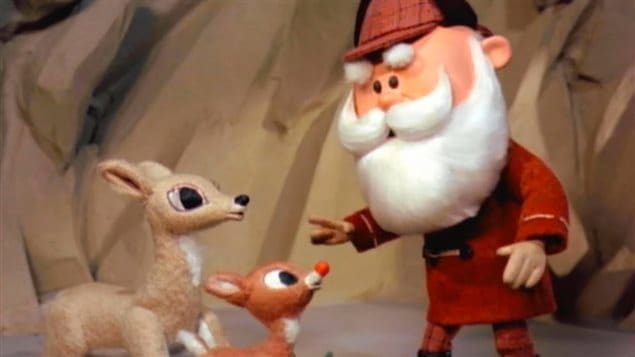 Santa- in a Canadian lumber jack cap, visits Rudolph and his mother. All three were Canadian voices.
Photo Credit: Rankin-Bass- via CBC

The Canadian voices behind a Christmas classic.

It’s an annual Christmas event and has been every year since that first broadcast in 1964, fifty years ago.

Once again the stop-action animation classic, “Rudolph the Red-nosed Reindeer” will be aired just before Christmas on several TV networks in the US and Canada.

What few will know however is that the American production featured all Canadian voices, except for that of American star, Burl Ives, who voiced the snowman-narrator.

The bendable puppets were designed in America, and built and filmed in stop-action in Japan.

As to why the American production company Rankin-Bass came to Canada for the voices, the answer is two-fold; talent and money.

Paul Soles, already a well-known personality on Canadian radio and TV, voiced the character of Hermey the Elf.  He says Canadian voice actors in Toronto were among the best in the world, and perhaps more importantly for the American company, were very inexpensive compared to American actors.

The well-known singer and actor Burl Ives on the other hand, a last minute inclusion as the American sponsors wanted some star power, got a much better deal. He, and now his estate, have cashed royalty cheques from the Rudolph broadcast every year since 1964.

As for the puppets used in the film, they were not quite as durable. Rankin-Bass didn’t store them properly and as the company moved its New York location some were trashed.

Rankin’s secretary took some home for nieces and nephews to play with under her Christmas tree. Afterward they were placed in a pile in the attic, but the heat melted them together and most were thrown out.

A slightly damaged Santa, and Rudolph survived however, They were eventually sold for $10,000.  The new owner had them professionally restored and they are now valued at about $200,000 US.

There are complaints about the version of the show aired in the last few years however. Critics say it has been very badly edited and compressed in order to fit the original one-hour special into the reduced time available on today’s advert-heavy US networks.