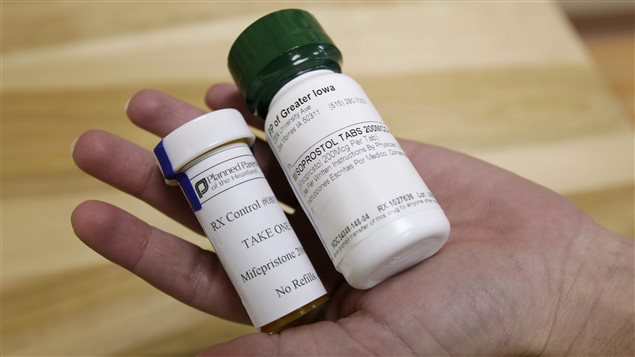 Canada’s health department is again delaying a decision on whether to approve an abortion pill already in use in 60 countries, according to an advocacy group.  The president of the National Abortion Federation, Vicki Saporta, says Health Canada has requested more information from the maker of mifepristone (also known as RU-486), and that could delay a decision until much later this year.

If approved, doctors could prescribe the drug along with misoprostol to induce an abortion similar to a natural miscarriage. It can be used to terminate pregnancies of up to nine weeks. The treatment has been used in France and China since 1988, in the U.K. since 1991 and most European countries by 1999. The U.S. and Australia approved it in the early 2000s.

In 2009, the Society of Obstetricians and Gynaecologists of Canada urged Health Canada to make the product available to women in Canada.

This treatment would be especially useful for Canadian women living in remote regions, note two doctors writing in the Canadian Medical Association Journal. “Access to any type of abortion remains limited in many areas across Canada.”

Health Canada officials refuse to say when they will make a ruling. Internal service standards say a decision should be made within 300 days of the application.

The agency had set itself a deadline of mid-January to decide on the application which was submitted in October, 2011 and was re-submitted in 2012, says Saporta. More than 750 days have elapse since the second submission.

It is estimated that one in three Canadian women will have an abortion at some point in their life, usually in the first trimester of pregnancy.