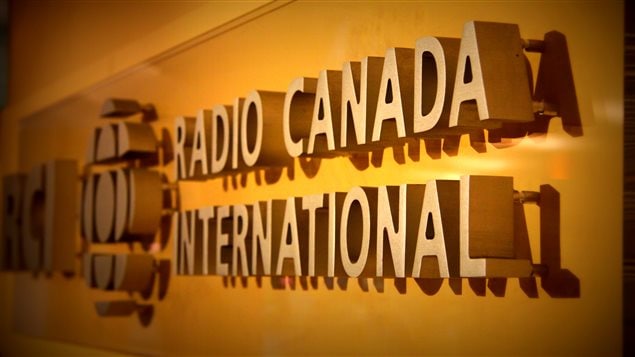 Last night a group of past and present members gathered to celebrate the occasion at a display set up in the cafeteria of the CBC/Radio-Canada building in Montreal where the office of RCI is located.

Originally viewed as method to get Canadian news in English and French to the hundreds of thousands of Canadian military personnel fighting abroad during the Second World War, it also added a German language broadcast as a psychological weapon, and later as a “denazification” effort, and still later as a trusted information source to East Germans during the long “Cold War”.

Post war, the role changed slightly to focus on Canada’s position on world affairs, and to explain how Canada’s democratic system functioned, along with examples of Canadian artists, culture, lifestyle and innovations. To this end many other languages were added including Dutch, Czech, Swedish, Danish, Norwegian, Spanish and Portuguese to Latin and South America and Europe, Russian, Ukrainian, and others.

Over the course of its 70 years, language services were added or dropped depending on a perceived need in a target location. In 1990 for example, RCI was broadcasting in 15 different languages.

As a shortwave broadcaster, RCI was always considered by its listeners around the world as one of the most trusted sources of news and information. In addition, for many years RCI was considered a world class producer of recorded orchestral and other music.

However, over the course of those seven decades, RCI has had to fight a number of threats to its existence as various governments and the public broadcaster dealt with budget cuts and even whether there was a need for a “Voice of Canada” to the world.

For a brief period the English and French flagship programmes were also broadcast domestically on the CBC and Radio-Canada networks, to late night Canadian audiences who expressed great satisfaction with the programmes.

That however did not save the service from a draconian budget cut in 2012, from just over $12 million per year, to just over $2 million.  This resulted in the closing of Brazilian and Russian services, the newsrooms, dismissal of many staff members and the end of shortwave transmissions. Expressions of shock and dismay were received from listeners around the world.

RCI however has successfully made a transition to the internet where it continues in its now five languages.