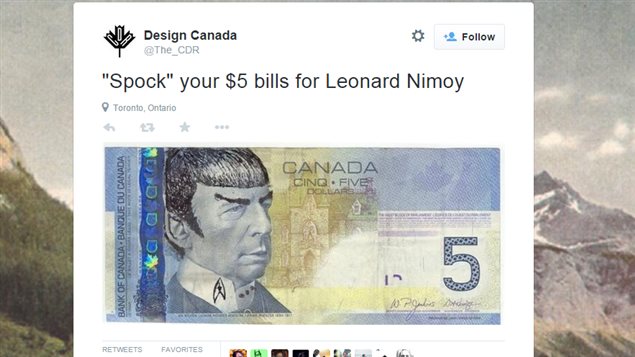 Canadians have been changing the face of the five dollar bill for years, but the death of actor Leonard Nimoy, Spock on the television series Star Trek, gave them even more impetus to show their appreciation of Spock.
Photo Credit: Design Canada/Twitter

For years Canadians have drawn over the face of former Prime Minister Sir Wilfrid Laurier to turn him into Mister Spock of the television series Star Trek. The death on February 27 of actor Leonard Nimoy who played the part of Spock spurred on interest and some doodling on the Canadian currency.

The new polymer edition of the five dollar bill is more difficult to draw on, but that did not stop some from trying. Even if, as the Huffington Post pointed out in 2013, the new Laurier image looks less like Spock than the old currency.

Media around the world noticed the trend.

Britain’s The Telegraph noted “Fans of the actor Leonard Nimoy who died on February 27 aged 83 have been editing their bank notes in tribute.”

Also in Britain Metro News asked “Could the tributes to Star Trek actor Leonard Nimoy possibly get any more imaginative than they have already? Well, yes, it appears they just did.”