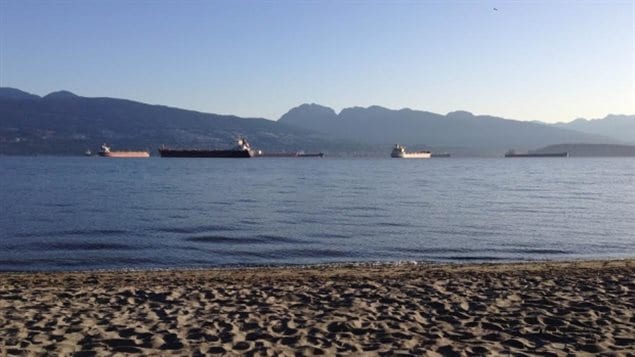 City of Vancouver authorities are asking people not to touch the toxic bunker oil in the waters of English Bay and to warn the Coast Guard if they see oil on beaches.
Photo Credit: Mike McArthur/CBC

As the clean-up continues the city is also asking people to contact the  Coast Guard if they see fuel on or near a beach.

The oil has already reached the sandy beach at the foot of Denman and Davie streets in Vancouver’s West End, which is close to the famed Stanley Park, reported CBC News journalist Farrah Merali.

According to the Vancouver Sun newspaper, a tonne of oil has already been recovered by clean-up crews.

A Surey Leader newspaper article says there was a delay in containing the spill Wednesday night, and quotes anti-tanker activist Ben West saying: “It may actually be lucky that this is only bunker fuel and not bitumen. If this were a spill of tar sands oil and this much time had passed without it being contained it likely would be game over for any kind of clean up.”