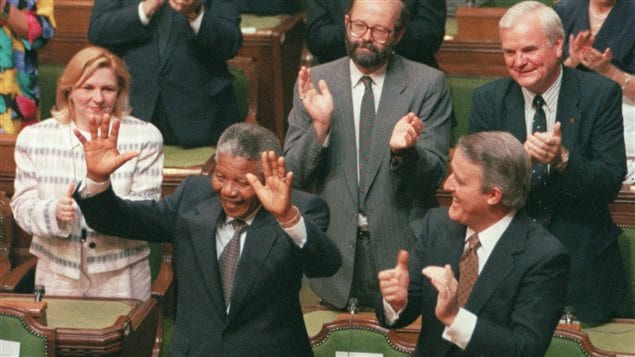 South African anti-apartheid activist Nelson Mandela raises his arms as he is acknowledged by the Prime Minister Brian Mulroney and other members of Parliament in Ottawa, June 18, 1990.
Photo Credit: Fred Chartrand/CP

Former Canadian PM Mulroney to be honoured by South Africa

Former Canadian Prime Minister Brian Mulroney will be among South African and foreign nationals who will be awarded National Orders at an investiture ceremony to be held on South Africa’s Freedom Day, Sunday, April 27.

In a speech earlier this month, South Africa’s Chancellor of the National Orders, Dr Cassius Lubisi announced that South Africa’s President Jacob Zuma will present the awards, the “highest awards that our country bestows on its citizens and eminent foreign nationals who have contributed towards the advancement of democracy and who have made a significant impact on improving the lives of South Africans.”

In his speech Chancellor Lubisi explained Brian Mulroney was receiving the award: “For his exceptional contribution to the liberation movement of South Africa. His steadfast support for the release of Nelson Mandela and for imposing sanctions on South Africa’s apartheid regime led to a free, democratic, non-sexist and non-racial South Africa.”

Canada’s National Post newspaper described the arrival of South Africa’s Nelson Mandela to Canada’s House of Commons in 1990 this way:

On June 18, 1990, exactly 127 days after he walked out of the gates of a South African prison, Nelson Mandela entered Canada’s House of Commons to thunderous cheers and applause. He was led into the chamber by then-prime minister Brian Mulroney, whose leadership on the international stage against South African apartheid had been impressive.